From Impurity to Blessing

A number of years ago, Pride Weekend in Boston fell on the Shabbat of Parshat Naso. Preparing my d’var Torah for Shabbat morning services that week, I wondered, what might this portion have to teach about GLBT pride?

At first glance, the answer appeared to be: not much. Naso seemed to consist of a series of wholly unrelated themes. Sandwiched between a census of Levite clans and a repetitive listing of tribal gifts for the dedication of the wilderness Sanctuary, we read about:

What could ritual impurity, unintentional theft, the suspected adulteress, and the laws of the Nazirite possibly have to say about gay Pride? So I began again. The first words of the portion were promising: “Naso et rosh…Lift up the head…” (Num. 4:22)—as good a euphemism for Pride as any! But how to account for what follows?

On second reading, I realized that despite their surface dissimilarity, each of these four sections deals in some way with social deviance, and the attempts by the community to deal with that deviance. Read with a “queer eye,” these then unfolded before me as a successive—and progressive—understanding of what it means to be queer in relation to the larger society.

Naso begins with a census of the Gershonite and Merarite clans of the tribe of Levi, and their respective duties in transporting the components of the portable Tabernacle, which sat at the center of the Israelite camp. The next chapter begins with instructions from God to Moses to remove from the camp “anyone with an eruption or a discharge and anyone defiled by a corpse. Remove male and female alike; put them outside the camp so that they do not defile the camp of those in whose midst I dwell”(Num. 5:2-3).1 This state of “defilement” is called tum’ah, a kind of ritual impurity which can be conveyed from one person to another, and which precludes the “impure” person from having any contact with the realm of the holy—most specifically, the Tabernacle and its environs.

The person in a state of tuma’ah can be likened to the most disturbing—and still far too common—understanding of what it means to be GLBT: a subversive, potentially contagious condition that is a threat to society. Accordingly, those with this condition must be “put outside the camp,” banished from “normal” society. Those who suffer this condition are antithetical to God’s presence, and by definition are outside the realm of the holy.

The following verses deal with a very different kind of social deviance. Here, the instructions pertain to a man or woman who realizes that s/he has wronged another (through fraud or theft), “thus breaking faith with the LORD” (Num. 5:6). In order to right the wrong, a series of steps must be followed: confession of the sin; restitution to the wronged party consisting of the principal amount plus one-fifth; and a sacrificial offering to God.

The violation here is a behavioral aberration, not a state of being. This corresponds to the view of homosexuality as a correctable deviance, essentially an error of judgment or a failure of will. With realization of one’s error, confession and proper rehabilitative action, the queer person can get back on track and can rejoin normative society, including a reconnection to God. The issue here is having the proper level of penitence and a commitment to changing one’s behavior, in order to come back inside “the camp.”

The case of the sotah, the suspected adulteress, is a bit more complicated. The situation involves a husband who suspects his wife of adultery, without witnesses or proof. Without either, he has no legal recourse against her. In such a case the woman would be brought to the priest, who would make her drink a concoction of water, dirt from the floor of the Tabernacle, and the words of a curse written and then rubbed off into the water. According to the words of the curse, if she was innocent, nothing would happen; if guilty, she would be unable to conceive, or perhaps suffer a miscarriage.

However shameful or traumatic this ordeal was for the woman, the focus here is ultimately not on her behavior, but on her husband’s jealousy. The ritual appears to have been a mechanism for assuaging the husband’s jealousy and anger, in order to restore some measure of peace to their home.

In this segment, the issue is not primarily the wife’s—or the queer person’s—“deviance” per se, as there is doubt as to whether she has done anything wrong. With the case of the sotah, the focus begins to shift away from assumed abnormality or wrongdoing on the part of the GLBT person, and onto the fears, hidden desires, and shame of those around him/her. The question is raised as to whether the problem is deviant behavior, or the projected fears and desires of those presumably acting according to social norms. Yet even if this is a step forward from the two previous examples, it is still the queer person who suffers, who is made to undergo an ordeal intended to calm the fears and doubts of others.

Separating Oneself for God

The final case of “deviance” is that of the person who makes a vow to become a Nazirite, in order to “set himself apart for the LORD” (Num. 6:2). The Nazirite was definitely outside the social norm—separating him/herself both through appearance (uncut hair) and behavior (abstention from wine, avoiding all contact with the dead). But unlike the person in a state of tum’ah, the transgressor, or the sotah, the Nazirite proclaimed her difference for herself, and willingly took on an outsider’s status as a path to holiness.

While some later rabbinic and medieval commentators were uncomfortable with the Nazirite’s path, the Torah itself does not seem to display the same ambivalence. It was possible not only to take on the Nazirite vow for a period of months or years, but to be dedicated as a Nazirite for life, like the judge Samson and the priest Samuel. On the Nazirite model, queerness is not bad, and deviant does not mean diseased or evil. Quite the opposite: it is a self-proclaimed path to holiness, a claim of difference that is socially sanctioned and perhaps even exalted.

Intriguingly, what immediately follows this segment on the Nazirite is God’s instruction to Aaron and his sons to bless the entire community of Israel:

Thus shall you bless the people of Israel. Say to them:

The LORD bless you and protect you

The LORD deal kindly and graciously with you

What are we to make of this abrupt transition from the laws of the Nazirite to the priestly blessing? Perhaps this: the dedication of the Nazirite to claim his identity for himself, to take the “queer” path as a path to holiness and wholeness, leads to blessing for the entire community. The priest—who in the earlier segments is the enforcer of norms and the gatekeeper between the deviant and the larger society—here becomes a vessel of blessing, not judgment. Parshat Naso has led us on a path from viewing GLBT status as an impurity or transgression to the blessing of self-proclaimed difference as an avenue of holiness and connection to the divine.

It may not be a coincidence that this progression in understanding queerness is framed by segments that deal with the construction and consecration of the mishkan, the Tabernacle in the wilderness. The mishkan can be understood as a physical corollary to the social structure that the Israelite community has been commanded to create, a covenantal community in which the Godly attributes of tzedek and chesed, love and justice, can become manifest in the world.2 Thus the detailed narrative of the construction of the mishkan contains clues for our understanding of what it means to build such a community or society.

Parshat Naso ends with Moses anointing and consecrating the mishkan and “all its furnishings, as well as the altar and its utensils” (7:1). Once he has done this, the heads of each of the tribes bring an offering to be used by the Levites in their service of the sanctuary.

Chapter 7 goes on to recount, in detail, the gift of every Israelite tribe, each brought on a successive day. What is remarkable is that each tribe’s gift is exactly the same. What is even more remarkable is that the Torah text, usually so economical in its prose, repeats word for word the details of every gift!

How are we to understand this repetition? In the introduction to the listing of the gifts, the text reads literally:

Like the repetition of the content of each of the gifts, this doubling of “one chieftain per day” seems extraneous and unnecessary—an indication that there is something here to notice. Each gift, the text seems to be saying, is both absolutely equal and absolutely unique. Each tribe’s gift is set off on its own day, so that it cannot be confused with any other. Yet every gift is, at the same time, exactly equal in value.

In building our communal mishkan, the full embrace of queerness means the ability to welcome and affirm the equal value of the gifts of every segment of the community, of every “tribe,” in all their uniqueness. In moving from the ostracizing and expulsion of the deviant “other” to the dedication of difference as sacred service, we allow the blessings of shalom, of wholeness, to flow to the entire community. Parshat Naso encourages us to celebrate GLBT identity by rejoicing in difference even as we affirm the equal value of each of our gifts. Something to take Pride in, indeed. 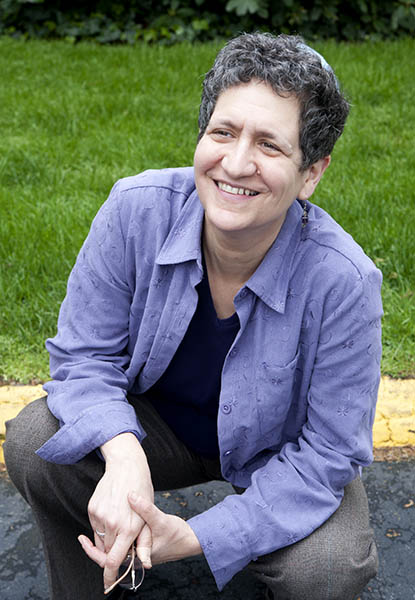