Because of the specific legal powers that Israel’s government grants its official Orthodox rabbinic institutions, non-Orthodox expressions of religious Judaism are often not recognized or supported by the State. At the same time, Reconstructionist, Reform, Conservative, Renewal, Liberal and other progressive movements of Judaism have grown in popularity and influence in Israel in recent years. The good news is that there are a growing number of Israeli organizations promoting the full equality of all streams of Judaism in Israeli law, as well as the flourishing of pluralistic Jewish study, worship, and community. Here are several that your community may want to follow, contact, or partner with.

Kehillat Mevakshei Derech is a Kaplanian Progressive congregation which serves the religious, cultural and spiritual needs of Jerusalemites, while promoting the values of Equality and Democracy, Justice and Peace through social activism and education.

We run preschool and kindergarten programs to attempt to ensure that the next generation of Israelis are brought up understanding that Judaism can be part of their moral lives and that its message is a universal one which encourages us all to see each individual as created in the image of the divine.

We house 12 step programs as part of our commitment to the spiritual, mental and physical health of our city.

We support a food bank program which feeds some of Jerusalem’s poorest families.

And of course, we engage in Jewish religious, cultural and social programming for our members. We hold shabbat and festival services, run B-Mitzvah programs for neighborhood families (and beyond) and we uphold the traditions of Israel in a modern, progressive, egalitarian, welcoming way. As we honor the past we seek the way to incorporate these traditions and values in our lives as modern Israelis.
Kehillat Mevakshei Derech was founded by students of Rabbi Mordechai Kaplan in 1962 in Jerusalem as an independent community (congregation) with an egalitarian and open approach to Judaism. In 1999 the Kehillah joined the Israel Movement for Progressive Judaism. Our community has a deep belief in Jewish religion and tradition, and a commitment to humanistic and democratic values.

We have a number of pathways for engagement with our community. Young families from our neighborhood are invited to look into our preschool and kindergarten programs. Many families find our B-Mitzvah program to be a wonderful gateway to the process of preparing for this significant moment in the life of their child. Membership in the community is an expression of ongoing commitment to our values and vision. We run many educational, social and cultural activities including weekly programming of all kinds (arts, health, Beit Midrash, etc…). We also have partner organizations who also run programming out of premises (with discounts for our members).

Before the advent of the COVID 19 pandemic, we enjoyed hosting congregational trips from America (and beyond) for Friday night services and meals. We enjoy partnership relationships with congregations in Rochester, New York and Manchester, UK. We have hosted Music concerts with Synagogue choirs from abroad, and during the Covid-19 pandemic we have organized online events with congregations around the world.

Our rabbi is sent to North America on a regular basis to help foster our relationships with congregations there who seek a way to positively impact on Israeli society.

We feel it is our duty to help Jews living around the world find connection with Israeli society and we look forward to being in touch with any congregation or individual who would like to know more about us and what we do.

The TALI Education Fund provides Jewish curricular resources, professional development for teachers, and experiential education programs to over 65,000 students and 3,000 educators in over 300 secular public schools and pre-schools all over Israel.

The great difficulty in Israeli culture is that there is no understanding of continuity, no appreciation of the organic, evolutionary development from the Jewish past to the Israeli present. There is no coherent narrative of the Israeli Zionist story as part and parcel of the Jewish story’s larger context. The alienation most secular Israelis feel in relation to Jewish riches caused a severe cultural incapacity. Today the Jewish people are waging two existential wars simultaneously:

Identifying Judaism with a political agenda from which people are trying to free themselves on a civil level creates a serious schism within their identity. But without some sort of Jewish identity, we will not be able to exist. 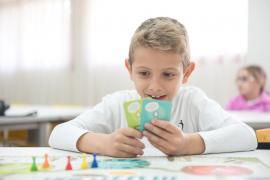 Additionally, TALI broadens its vision of Israeli Judaism to include a two way nurturing relationship with Jews and Jewish communities around the world.  Israeli Judaism has much to learn from the creativity of Jewish Communities across the seas.  TALI’s leading professional development program includes in-depth learning about Jewish People and a meaningful engagement with peer educators from around the world.

TALI is recognized as a leading provider of pluralist content and develops innovative resources, digital platforms and games in Hebrew, English and other European languages.

TALI offers a monthly family education resource at the beginning of every Hebrew month called - @Home with TALI which all families can receive. TALI also has a number of websites which can be used by educators and communities in the United States. All TALI materials promote a pluralist view of Judaism, Jewish tradition and text.

TALI has a rich library of educational resources and games which can benefit educational settings. TALI’s Halleli program - an intense professional development program for Israeli educators travels to the US with a desire to meet and engage with Jewish Communities. We would be interested in developing relationships with new communities which we could visit with and/or with groups of senior educators who would be interested in engaging in learning with Israeli peers.

TALI offers a short Bat and Bar Mitzvah class which addresses Jewish and Israeli Identity which we run via zoom with TALI educators. We would be happy to offer this as an addition or companion to the Synagogue program offered locally. We also have a curriculum which was developed to connect 4th and 5th graders in Israel and the US with the concept of Jewish Peoplehood - “Friends Across the Sea” which is available and can be implemented in Reconstructionist Communities.

BINA was established in 1996, in the aftermath of the Rabin assassination, looking to perform a tikun (repair) in Israeli society, to help Israelis reconnect with the Jewish-Democratic values upon which Israel was established and to build hope and social solidarity in a time of division.

Much has changed over the past 25 years, though the need for BINA is as strong as ever. Many Israelis, especially young hiloni (secular/non-Orthodox) Israelis, feel disempowered and alienated with regard to Judaism and their own Jewish identities. Many Israelis see Judaism as disconnected from or even opposed to democratic values of equality, justice and human rights. Moreover, divisions in Israel - among Jews and between Jews and non Jews - as well as between Israel and world Jewry have reached new depths. And though the Israeli Jewish renewal movement has seen much growth, many - especially non-Ashkenazi Israelis and those in Israel’s socioeconomic periphery - have yet to find their way into the movement, and there remains a disconnect between the work of Jewish pluralism and broader issues of social justice. 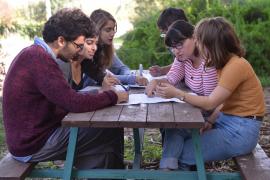 Today BINA touches the lives of roughly 100,000 individuals each year.

BINA leads immersive Jewish service-learning programs for hundreds Israelis and Jews from across Israel and the world, combining Jewish learning with social action in underserved neighborhoods, working with both Jews and non-Jews, building new generations of leaders committed to Jewish pluralism and tikkun olam. BINA leads seminars and workshops on Jewish pluralism and social justice for tens of thousands of Israeli students and educators, engaging them in the diversity of both Judaism and Israeli society, and empowering them to take ownership of their own Jewish identities and reshaping what Judaism and Jewish education means in Israel. Based out of BINA’s network of Secular Yeshivas in Tel Aviv, Beer Sheva and Haifa and in public spaces throughout the country and online, BINA runs educational programs and Jewish pluralistic cultural events that bring together thousands of Israelis of diverse backgrounds, building social solidarity while expanding and diversifying what public Jewish life and the Jewish discourse look like in Israel.

BINA offers numerous opportunities for individuals to study and volunteer on the ground in Israel, whether through individual courses or immersive service learning programs such as BINA Gap Year, BINA Masa Israel Teaching Fellows, and Onward Israel summer programs. BINA also offers opportunities for online learning as well as resources for individual or group learning, available at https://www.bina.org.il/en. And anyone can take in BINA’s work of growing Jewish pluralism and social change in Israel by making a donation to BINA at https://www.bina.org.il/en/donate.

Hiddush - Freedom of Religion for Israel

Since its inception, Hiddush has initiated programming that continues to unite Jews across the political and religious spectrums. Hiddush’s strategy includes mobilizing grassroots support among Israelis and world Jewry, serving as a resource for policy makers and the media, and raising public awareness about the critical nature of this failure, which threatens the very survival of Israel.  Its regular polling of Israeli public opinion and the dissemination of its results in the media and to opinion leaders and policy makers has placed the issues of religious freedom and equality on the agenda of a growing public, both in Israel and North America.  Simultaneously, Hiddush pursues advances “on the ground” through litigation and other legal avenues.

Hiddush works with several organizations in Israel on a wide variety of religion/state issues, among them are freedom of marriage, inclusion of women in the leadership of religious councils, pluralistic burial, the refusal of the Haredi educational system to teach core curricular studies and more. Together with its North American associates, the broad-based coalition “Ruach Hiddush: Rabbis and Cantors for Religious Freedom” and the network of attorneys “J-Plan — Jewish Pluralism Legal Action Committee”, Hiddush is conducting a campaign that, to date, has garnered endorsements from religious, communal, and intellectual Jewish leaders of its “Vision Statement: Israel as a Jewish and Democratic State”. These signatories, representing the spectrum of Jewish life, are joined by almost 2,000 individuals and organizations.

Hiddush, through its legal department, has taken the leadership in the effort to ensure the registration in Israel of couples who marry via videoconferencing in Utah. This exciting new avenue affording the right to marry to thousands of couples every year who, today, cannot marry legally in Israel or refuse to marry under the Chief Rabbinate. We are currently pursuing an administrative petition against the Minister of the Interior and the Population Authority, on behalf of Hiddush, 8 Israeli couples who married via Utah and 2 Utah rabbis who married some of them.

How can Reconstructionists and others engage with the organization?

We encourage you to join the struggle to advance religious freedom and equality in Israel by signing on to the Vision Statement  and to keep informed about these critical issues by subscribing to Hiddush’ online newsletter and our frequent [English] webinars.  We are at your service in providing information about all aspects of religion and state in Israel, and welcome your queries and suggestions [e-mail to info@hiddush.org].