At Congregation Dor Hadash, life certainly hasn’t returned to normal. Perhaps, considering the full scope of the trauma endured and the losses suffered, “normal” isn’t possible or even desirable. Yet in the two months since a gunman claimed the life of one member, Dr. Jerry Rabinowitz, and critically wounded another, Dan Leger, the community has settled into something approaching a “new normal,” according to Judith Yanowitz, Dor Hadash’s vice president for ritual.

What could the “new normal” possibly look like following an attack that claimed 11 Jewish lives, the deadliest anti-Semitic act in American history?

For one thing, many more people are attending services. More of the congregation’s members have been going regularly, with a number offering to take part in leading services for the first time (which is particularly important for a lay-led congregation). Dor Hadash also has received a steady stream of visitors from the greater Pittsburgh area and beyond. 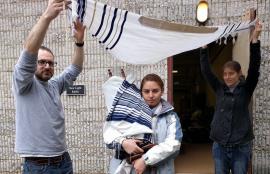 Mara Silver carries a Torah scroll out of the Tree of Life building, accompanied by Matt Nicotra and Symone Saul.

With the Tree of Life building closed indefinitely, the community has found a temporary home at Rodef Shalom Congregation in Shadyside, Pa., where it is expected to remain for at least six months. Tree of Life Or L’Simcha Congregation is also meeting at Rodef Shalom. Where Dor Hadash will call home for the long-term remains up in the air. (Read this moving story in the Pittsburgh Post-Gazette for a powerful look at this unique community.)

“Attendance is higher than it is has ever been. I don’t expect it will continue this way,” said Yanowitz. “It is clear that the community is finding comfort in coming together. Services have really been spiritual. There’s been a lot of connectedness; we have hit the right tenor.”

A Visit From Friends

In early December, a delegation of 28 members from Darchei Noam, the Reconstructionist congregation in Toronto, joined Dor Hadash for a weekend of prayer and gathering. (Delegations interested in visiting Dor Hadash should contact ritual@dorhadash.net.)

Members of Darchei Noam packed into cars and drove nearly six hours from Toronto to Pittsburgh to show support for their fellow Reconstructionists. In addition to attending services, they received home hospitality and participated in a community Shabbat dinner. Some Darchei Noam members also took part in a conversation about trauma led by Darchei Noam’s rabbi, Tina Grimberg, who has a background in family therapy. (Grimberg made a point to clarify that the conversation was not considered therapy.)

“I understand about trauma. I can never approach something like this from the perspective of lifting someone’s spirit,” said Grimberg. “But it is up to me as a Jew to do a mitzvah, and the mitzvah is to be with people in times of great sorrow.”

Grimberg was raised in Kiev in the Soviet Union, where anti-Semitism was a daily reality. She recalled feeling a deep shame when her grandmother spoke Yiddish in public, even urging her not to do so. The most common Jewish response to anti-Semitism was, in essence, to hide one’s Jewishness, she said. On the other hand, Dor Hadash has responded to a heinous anti-Semitic act by doubling-down on Jewish community and Judaism.

“The experience of reciting Kaddish with them was very moving and very real. Our community was so touched by it,” said Grimberg. “To see the people who have gone through the impossible cling to our traditions gave to us a deeper understanding of our ancestors.”

In a “thank you” note to the members of Darchei Noam, Yanowitz wrote that the Dor Hadash community was “moved, touched and comforted by your presence. Darchei Noam gave us a gift that we did not know we deeply needed.”

Not an Isolated Congregation

Fortunately, Dor Hadash was able to move its ark and Torah scrolls from the Tree of Life building to Rodef Shalom. Yet for a variety of reasons, including increased attendance at services, the congregation faced a severe prayerbook shortage.

Reconstructing Judaism sent Dor Hadash more than 120 Reconstructionist prayerbooks, as well as a number of copies of the Etz Hayim Torah commentary. As of Dec. 12, 79 members of the Reconstructionist community of communities had donated generously to fully fund this effort.

Rabbi Shawn Zevit, religious leader of Mishkan Shalom in Philadelphia, was among those donors. Though Dor Hadash employs no rabbi, for several years Zevit served as its visiting rabbi, periodically traveling from Philadelphia to Pittsburgh to lead services. He would often lodge in member’s homes and frequently stayed in the Rabinowitz and Leger households.

“Dor Hadash is so much in my heart personally,” he said, pointing out that many members of his congregation either grew up in Pittsburgh or had deep connections to the area. “The surprising element of all this is that Pittsburgh is also alive here at Mishkan.”

Yanowitz said the congregation has felt the support of Reconstructionists from across the world, and from Reconstructing Judaism.

“It was so important for us to know that we are not an isolated congregation,” she said.

Those Most Deeply Affected

Some community members have been able to more or less return to their normal lives. Others have had a more difficult time. One member, who has not been publicly identified, managed to escape from the building and is dealing with serious trauma as a result. Several other members were about to enter the building when the shooting began and now struggle with the reality that their lives were saved by a matter of minutes.

Then there are the two families most profoundly affected by the crime. Dan Leger, a regular synagogue-goer whom one member described as the “heart and soul” of the congregation, was seriously wounded and remained hospitalized for several weeks. He is home and said to be recovering.

Dr. Jerry Rabinowitz, the 66-year-old former co-president of Dor Hadash, was killed in the attack, and hundreds turned out at his funeral to honor his life. Rabbi Elyse Wechterman, executive director of the Reconstructionist Rabbinical Association, represented the movement at the funeral. (Rabbi Deborah Waxman, Ph.D., president of Reconstructing Judaism, drove to Pittsburgh the day after the shooting and visited with community members.) Miri Rabinowitz, his widow and former co-president, has begun attending services again, even assisting with one of the services.

For weeks after the tragedy, the congregation’s website remained unchanged. However, on Dec. 17, for the first time, Dor Hadash spoke as one voice in response to the tragedy, posting a powerful statement on its website. (Read the whole statement here.)

“We were attacked because we are Jews. We condemn the white nationalist ideology the perpetrator embraced, a toxic belief system that promotes anti-Semitism and demonizes non-white immigrants, Muslims, the LGBTQIA+ community, and people of color,” the statement reads.

“We raise our voices to demand an end to hate speech and the othering of any human beings by anyone, including our elected leaders. We raise our voices to demand rational gun laws to help prevent future tragedies. This tragedy will forever be a part of our story, but it will not define us. We will move forward and rebuild, not only our congregation, but our country.”