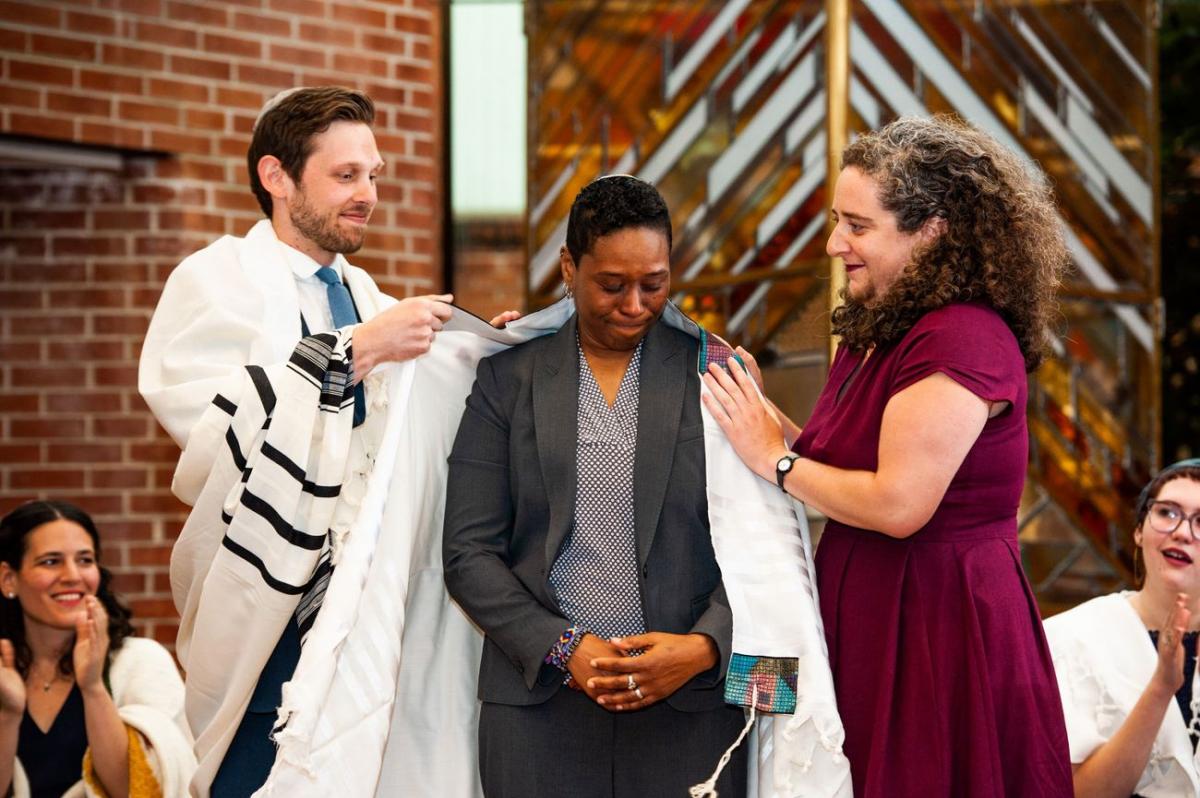 Like other Jewish institutions, the Reconstructionist movement made a commitment to racial justice in 2020 as part of its stated mission to blend a strong commitment to Jewish tradition with the search for contemporary meaning.

Unlike some others, its leaders vowed to make it more than just lip service. That year, their Tikkun Olam Commission made racial justice the primary focus of its work. Rabbi Deborah Waxman, president and CEO of Reconstructing Judaism, said that in 2021, their board of governors “has elevated racial diversity, equity and inclusion to one of our highest strategic priorities.”

Reconstructing Judaism is the central organization of the Reconstructionist movement, training the next generation of rabbis, fostering emerging expressions of Jewish life, and maintaining strong commitments to both tradition and the search for contemporary meaning.

Rabbi Sandra Lawson — one of the first African American, queer, female rabbis in the world — joined Reconstructing Judaism as the inaugural director of racial diversity, equity, and inclusion in January 2021. Her vision goes beyond just discussing racial justice issues with the congregation. “I’m more interested in changing the culture,” she said.

Lawson, who was born in St. Louis, Mo. in 1970, grew up in a military family. A U.S. Army veteran, she holds degrees from Florida’s Saint Leo University and Clark Atlanta University, and has served as an investigative researcher for the Anti-Defamation League, identifying hate groups in the Southeast. Lawson’s teachings on Jewish life have also earned her a large and loyal following on Twitter, Snapchat, and other social media. 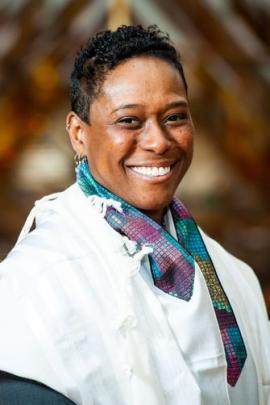 Rabbi With a Cause: Sandra Lawson was born in St. Louis, Missouri in 1970, and grew up in a military family. Photo by Jordan Cassaway.

While studying at the Reconstructionist Rabbinical College, and after her ordination in 2018, Lawson was qualified for opportunities that were denied because of the color of her skin. She was serving as the associate chaplain for Jewish life and Hillel Jewish educator at Elon University in Elon, NC. when she learned of the opportunity at Reconstructing Judaism.

“I took this job so that I can do my best to keep another student or colleague from experiencing what I went through,” she said. “I won’t be able to erase racism, but maybe I can make it safer for our Black and Brown colleagues the same way we made it safer when the first generation of LGBTQ rabbis came along.”

Lawson’s position was made possible by a grant from the Jews of Color Initiative as part of a series of allocations to pilot programs and early-stage efforts to develop and support Jews of Colors in Jewish institutions and communities. In the announcement of Lawson’s hiring, Ilana Kaufman, executive director of JoCI, commended Lawson’s work in making Judaism more accessible, saying, “We are thrilled to see that Reconstructing Judaism has recognized Rabbi Sandra as a vital leader [and] we are proud to be part of this process.”

Lawson created the Reconstructing Judaism Pilot Congregation Assessment Tool for Racial Diversity, Equity, and Inclusion to help rabbis and other leaders make their religious spaces more welcoming. The assessment tool — which focuses on anti-racist reading materials, deep introspection, and visual assessments of religious spaces to help rabbis and other leaders gain insights and learn tactics that can make their congregations more inclusive and equitable — was developed in part through Lawson’s conversations with white rabbis and Jewish leaders who had done racial justice work.

Lawson invited four congregations to beta test the Assessment Tool in a pilot project. The participating rabbis were Rabbi David Basior of Kadima in Seattle; Rabbi Elizabeth Bolton of Or Haneshamah in Ottawa, Canada; Rabbi Josh Jacobs-Velde of Oseh Shalom in suburban Washington, D.C.; and Rabbi Rachel Weiss of the Jewish Reconstructionist Congregation in Chicago. They recently shared their experiences at B’Yachad: Reconstructing Judaism Together, the movement-wide convention held in late March in suburban Washington, D.C. and online.

Lawson began the pilot project by asking each rabbi to form a working group of leaders in the community. She met with them to recommend steps for them to become more aware of how Jews of Color might experience their spaces. After reviewing the movement’s strategic plan for racial justice, they dove into recommended readings, including a white Ashkenazi privilege checklist. They met in pairs and as a group to analyze what they’d learned.

“The checklist helped us as Ashkenazi Jews start to notice all of these elements that we kind of take for granted, like not being seen as exotic when we walk into a synagogue and usually having prayers and melodies that are familiar and reflect the traditions we’ve grown up with,” Jacobs-Velde said. 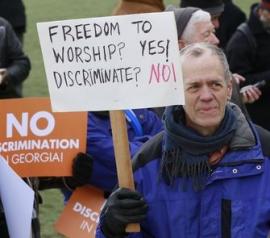 2019 Demonstration: A member of Bet Haverimm, an Atlanta congregation where Rabbi Sandra Lawson was a member.

Next the groups walked through their physical spaces to view them through the eyes of Jews of Color and BIPOC people, then discussed ways to improve the visual environment. “We saw things that weren’t going to be welcoming—materials in the library, signage when you walk in the door, toys in the preschool—where a Jew of Color would walk in and see themselves,” Weiss said.

Jacobs-Velde described how his group realized that a large display case at the entrance of his synagogue where traditional Judaica was displayed presented an opportunity for sharing more diverse representations. And how the placement of diverse images required a new consciousness. “We have some beautiful posters saying, ‘Jews come in all colors’ from the Jewish Multiracial Network, but they’re located in the school wing where few members can see them,” he said. “ In our sanctuary, we have an Israeli flag and an American flag. We stopped to ask who is this inclusive for and who is it not inclusive for.” He also mentioned that they’re reconsidering how they train their greeters to create a more welcoming atmosphere.

Then, the four rabbis and their working groups studying resource materials borrowed from Audacious Hospitality, the Union for Reform Judaism’s program focused on racial diversity, equity, and inclusion work.

Finally, the pilot program groups met with Lawson to review their discoveries and look at next steps. “This is the beginning of the beginning,” Lawson said, emphasizing the ongoing nature of the work. These people aren’t going to get a certificate saying they’ve passed anti-racism, or that their congregations are no longer racist,” she said.

At the B’Yachad convention, the rabbis and members of their working groups described their experiences with the pilot project, from joy to discomfort, to sometimes feeling attacked, and how working with the assessment tool helped them realize those reactions are a natural part of the process. They emphasized the need to listen to Jews of Color and hear what they were saying, even if doing so was painful.

“Like many congregations, ours are filled with loving, wonderful, social justice democracy-loving justice seeking white people,” Weiss said at the convention. “This assessment tool is a really good one that we should all experience, to say, ‘Let’s look at how you yourself need to change.’”

Bolton shared that one of the “Aha!” moments for her group was taking responsibility for being proactive. “It’s when we stop saying, ‘We’re so welcoming and inclusive, why don’t they come to us?’ That’s the work,” she said.

Basior noted the solidarity that resulted from the process. “It allowed us to bring people together who care about and had been doing this work — internally and externally — with a firm sense that we’re on the path of approaching this issue together,” he said, adding that the training enabled people of different generations to get on the same page.

“We live in and are the product of a society that is deeply racist, and we are deeply racist,” Weiss said at the convention. “We can have books in the library, dolls in the classroom, liturgy in the pulpit, [but] if we don’t actually talk about our personal responsibility for our personal actions and use the synagogue as a container for that, then that’s only part of it.”

Lawson emphasized the need for deep introspection. “There are a lot of congregations doing anti-racism work, showing up at protests and rallies, but they’re not doing the internal work on anti-racism that needs to be done so that Jews of Color can belong in Jewish communities,” she said. “None of our synagogues are walking around saying ‘We don’t want you here.’ But they don’t know that the things they don’t see might feel unwelcoming to people. There are a lot of subtle ways that we tell people they’re not welcome.”

Congregations are already expressing interest in signing up for the next cohort. “I’m trying to help remove the shame and guilt around talking about racism,” Lawson said. “I believe that people’s hearts are in the right place. They need education on what racism looks like. They need to learn to listen. They need to understand the white experience they have is not a universal experience for all people. And they need to have some humility around what they don’t know. That’s when I think things will really start to change.”

Part of the urgency fueling this work comes from the demographic browning of America and its impact on Jewish communities. “I’m concerned about the number of phone calls and messages I get from Jews of Color who are fed up and are leaving the Jewish community, who don’t want to be part of it,” Lawson said. “If we don’t start creating spaces where Jews of Color belong, we’re losing future congregants, future rabbis, future cantors. We can’t afford to lose people who actually want to participate.”

Check out Hashivenu, Rabbi Waxman’s podcast on Jewish teachings on resilience, with Rabbi Lawson as her co-host. This episode on allyship has been downloaded more than 10,000 times.