What are the key ethical questions facing Jews and Jewish communities today? How can scholars, rabbis and communal leaders discuss ethics in a way that impacts how people behave in the real world?

“Jewish Values & the Ethical Now: A Conference in Celebration of Rabbi David A. Teutsch, Ph.D” will test a new model for exploring such questions. Organized by the Levin-Lieber Program in Jewish Ethics, a project of the Reconstructionist Rabbinical College’s  Center for Jewish Ethics, the conference will take place on March 10-11 at the National Museum of American Jewish History in Philadelphia. The gathering of academics, public intellectuals, religious leaders and members of the public will honor the career of Teutsch, a pioneering scholar and Reconstructionist movement leader who has taught two generations of rabbis, and made ethical concepts accessible and relevant to the broader public. 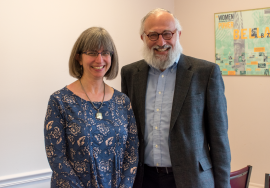 “The goals of the conference are to highlight cutting-edge thinking. How can we draw on tradition and Jewish values to address urgent questions facing the world today, questions that earlier generations of Jewish thinkers did not confront or even imagine?” said Rabbi Mira Beth Wasserman, Ph.D., who in 2017 succeeded Teutsch as the center’s director.

Teutsch said that having a conference held in his honor “is a very humbling experience and not anything one expects or plans to have happen. I really see it more as a tribute to what the Ethics Center has accomplished than to me personally.”

The conference will feature internationally renowned scholars, including Rabbi Julia Watts Belser, Ph.D., who teaches in the theology department at Georgetown University and focuses on queer theory, feminist thought and environmental ethics; and Paul Root Wolpe, Ph.D., a professor of Jewish bioethics and neuroscience at Emory University. Wolpe and Belser will be in conversation on March 10 at 7:30 p.m. in a public symposium titled “Jewish Values & the Ethical Now.” Afterwards, Teutsch will present a response to the speakers.

The conference as a whole will include representatives of the four largest branches of Judaism — Conservative, Orthodox, Reconstructionist and Reform — as well as one Christian theologian, Rev. Katie Day, Ph.D. Wasserman explained that the conference will focus on issues of power and gender, which in the era of the #MeToo movement have often been discussed in a political context, but also raise many ethical concerns. A session moderated by Rabbi Jacob Staub, Ph.D., a leading thinker of the Reconstructionist movement, will also focus on the Israeli-Palestinian conflict from an ethical perspective.

“We are hoping to make some progress, both in the tone of how we talk together about ethical challenges and also towards clarity about what ethical issues are at stake,” continued Wasserman, who teaches rabbinic literature at RRC and is the author of Jews, Gentiles, and Other Animals: The Talmud After the Humanities. “We want to have the people on the ground who are leaders in Jewish communities in conversation with the most thoughtful scholars in the field of Jewish ethics. We are trying to establish a template for how we can bring scholars into conversation with religious leaders and policy-makers.”

This is the first public conference taking place under Wasserman’s leadership and, in many ways, represents a passing of the baton from one scholar/rabbi to another.

Teutsch founded the Center for Jewish Ethics in 1994 while serving as president of the Reconstructionist Rabbinical College, and after stepping down from the presidency in 2002 devoted much of his energies into building up the initiative. A former president of the Society of Jewish Ethics, he is considered a pioneering figure in the field, particularly in the areas of Jewish bioethics and speech ethics. He is perhaps best known for developing a system known as Values-Based Decision-Making, which serves as an ethical guide for those informed by, but not bound by, Jewish law. Through his work with the Center for Jewish Ethics, Teutsch edited the three-volume Guide to Jewish Practice, a landmark work and comprehensive guide to living a Jewish life from a Reconstructionist perspective.

“In our era, we have to find ways to talk about Jewish ethics that are accessible and useful to Jews who don’t subscribe to halakhah as binding,” said Teutsch. “What we have done has really helped to flesh out the legacy of serious ethics work in a post-halakhic framework.”

Since becoming director of the Ethics Center in 2017, Wasserman has introduced a focus on power and gender, launching a project called the “Torah of #MeToo.” Teutsch praised Wasserman as a scholar, administrator and public voice, adding that it will be gratifying to watch the direction she takes the center.

“I really appreciate David wanting this conference not to be retrospective on his contributions, but to advance the quality and depth of ethical deliberation about relevant questions facing Jews today,” said Wasserman. “His legacy is always going to be thinking about the questions of today and questions of tomorrow, and how to make a practical difference.”

Did you like this feature and want to see more? Support the organization that makes it possible, Reconstructing Judaism.