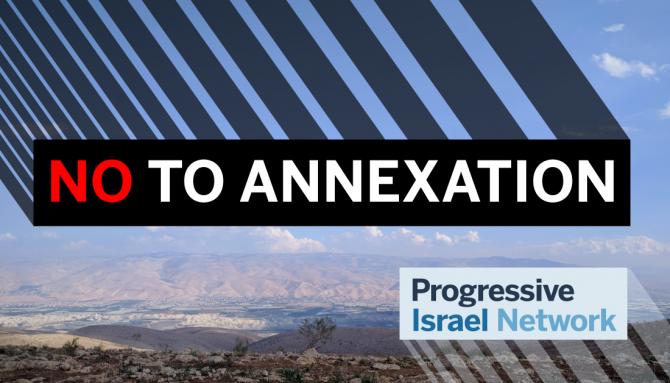 Today, thirteen organizations – the coalition members of The Progressive Israel Network (PIN), the Israel Policy Forum, the National Council of Jewish Women, and the Reconstructionist Rabbinical Association – sent a letter to the heads of Israel’s political parties calling on them to refuse any kind of unilateral annexation of the West Bank or parts of it.

As heads of American Jewish organizations who care deeply about the State of Israel and are committed to safeguarding its future as a democratic homeland for the Jewish people, we implore you to consider the costs of any unilateral annexations in the West Bank, and ask that you refuse to support annexation as a policy guideline for any government that your party may join.

We recognize that political parties are currently immersed in the process of negotiating the makeup of, and determining the policy guidelines for, Israel’s next governing coalition. We are also aware that in recent months, leading parties have proposed annexing parts of the West Bank as a possible policy of Israel’s next government. Our own government, under President Donald Trump, has broken with prior administrations from both major parties in signaling that it may endorse such unilateral actions by Israel.

Mistaking such a “green light” from the president for any type of consensus on the part of either US political party would be a dangerous error for Israel. Annexation, and any actions that pave the way toward annexation, threaten not only Israel’s security and its hopes for peace, but pose a grave threat to its democratic character and international standing. Many of the leaders of Israel’s own military and intelligence communities have warned of their likely ramifications. They would push Israel further down a path to endless conflict and permanent occupation — a path that runs counter to the shared democratic values and commitment to the pursuit of peace that have long formed the heart of the US-Israel relationship. Simply put, the approach of this president does not represent the long-term interests and likely future policy of the United States.

The vast majority of American Jews support a two-state solution to the Israeli-Palestinian conflict. Our organizations represent this majority. We believe that achieving an end to the Israeli-Palestinian conflict and the occupation via a negotiated two-state agreement is the only viable pathway to peace for Israel, to secure Israel’s future as a democratic homeland for the Jewish people, and to ensure its standing as a respected member of the family of nations.

For the sake of the State of Israel’s security, its democracy, its global standing, its relationship with the United States and with the American Jewish community, we urge you to reject annexation and refuse to participate in any government that would support it.

The Progressive Israel Network is a coalition of ten leading organizations representing Americans committed to pursuing democracy and equality in Israel and to peace between Israelis and Palestinians. The coalition speaks with a unified voice in support of democracy and equal rights, religious freedom and pluralism, and a two-state solution. Its founding principles can be found here. The network’s founding members are Ameinu, Americans for Peace Now, Habonim Dror North America, Hashomer Hatzair, The Jewish Labor Committee, J Street, The New Israel Fund, Partners for Progressive Israel, Reconstructing Judaism, and T’ruah.

Signatories to the letter released the following statements:

Kenneth Bob, President of Ameinu: “It’s a moral and practical imperative for all supporters of Israel, regardless of their political stripes, to reject calls for unilateral annexation of any part of the West Bank. The only way to ensure Israel’s continued existence as a democracy and a Jewish state is through a negotiated two-state solution to the conflict with the Palestinians.

“While Trump’s ‘peace plan’ has yet to be unveiled, it is extremely unlikely that it will help advance the cause of peace. Regardless of what’s in the plan, the American Jewish community remains committed to the two-state solution and rejects any unilateral action that will make it more difficult for the parties to achieve a durable peace that will satisfy the political aspirations of both Israelis and Palestinians. We call on Israeli political leaders to do the same.”

Aviva Meyer, Americans for Peace Now Acting President & CEO: “Together with our sisters and brothers at Israel’s Peace Now movement and our US partners, we call on Israel’s leaders to form a government that strives for peace and rejects settlement construction and annexation, policies that threaten Israel’s future.”

Jeremy Ben-Ami, President of J Street: “Carrying out unilateral annexations in the West Bank would ultimately destroy Israeli democracy and lead the country down a disastrous path to permanent conflict. It’s vital for Israeli leaders to recognize that whatever the dangerous and deluded policies of the Trump Administration, the vast majority of Americans and American Jews are strongly opposed to annexation and remain deeply committed to the achievement of a peaceful two-state solution.”

Daniel Sokatch, CEO of The New Israel Fund: “We have said for years that there is a choice to be made between Israel’s Jewish character, its democracy, and its control over the Palestinian territories. A future government of Israel that unilaterally and illegally annexes Palestinian territories would not only dynamite decades of peacemaking aimed at a two-state solution, but would also sell out the hope so many of us have for a democratic future for Israel.

“The cynical settler right that peddles annexation wants the world to believe that there are no costs to their plan. But we know the costs, and they are steep. They will be borne by Israeli and Palestinian people. Annexation will lock Palestinians into the intolerable reality they have lived in for 52-years and Israeli democracy will not endure.

“Israelis of all stripes want to live in a democracy. This is why all those who care about Israeli and Palestinian people, all those who support Israeli democracy around the world, must stand firmly against annexation.”

Rabbi Jill Jacobs, Executive Director of T’ruah:  “T’ruah brings the moral voice of more than 2,000 North American rabbis, cantors, and their communities to standing up for human rights, both in North America and in Israel and the occupied Palestinian territories. Annexing the settlements would violate international law and will further codify the denial of basic human rights, including civil and political rights, to the millions of Palestinians living under Israeli military rule. Those of us working toward a long-term two-state solution that guarantees the self-determination of both peoples must oppose any unilateral moves that place a roadblock in the path toward peace.”

Oren Zukierkorn, Secretary General of Hashomer Hatzair World Movement: “The future of our two peoples depends on finding a path built on the hope that one day we can live in peace together. Any unilateral actions of this sort builds another obstacle that stands in the way of that hope. The annexation of any land that is currently occupied territory is a step that takes us further away from reaching a just and peaceful solution.”

“Hashomer Hatzair’s ideology states that ‘Zionism stems from the belief that all peoples deserve a right to self-determination, and that Israel is the expression of Jewish self-determination.’ Each nation has the right to define their story, their home, and their future. This is true for all peoples, including both the Jewish people and the Palestinian people. We cannot be a free people as long as we oppress others and Israel cannot be an exemplary society as long as we promote injustice. The morality of our actions directly impacts the morality of the world around us. If we expect other nations and peoples to be in solidarity with us, it is our duty to stand in solidarity with others; the Palestinian people in particular.”

Sheila Katz, CEO, National Council of Jewish Women: “At the National Council of Jewish Women, we fight for the security and safety of women and all families, both in the US and Israel. In signing this letter, we are stating loudly and clearly that unilaterally annexing lands is in direct opposition to the promise of a negotiated two-state solution, peace, and a democratic future for Israel. In the search for an end to cycles of violence and a future in which all peoples can thrive, we stand together with our Israeli feminist partner organizations in calling for fair and just diplomatic solutions that foster both security and also respect and dignity for all involved and for generations to come.”

Stuart Appelbaum, President of the Jewish Labor Committee:  “Working men and women on both sides of the Green Line will not have their lives improved by annexation of land by the State of Israel – on the contrary, such moves will embitter many of those most directly affected, and make any fair, just, and mutually agreed-upon resolution all the more difficult. Bold steps towards peace and security, not short-term political maneuvering, must be the priority of all Israeli leaders and their supporters in that country and abroad.”

Leah Schwartz, Secretary General of Habonim Dror North America: “As a youth movement, we are uniquely invested in Israel’s future. We need Israel to live up to the Zionist dream — to actively work towards a two-state solution built on peace, justice, and coexistence with the Palestinian people.”

A statement from Reconstructing Judaism and the Reconstructionist Rabbinical Association: The headlines concerning Israel during the month of May were painful. Israel’s supreme court issued a ruling that authorizes the razing of several Palestinian villages and the forcible eviction of over 1000 Palestinians from the Masafer Yatta region in the West Bank. Some of these […]

As leaders of Reconstructing Judaism and the Reconstructionist Rabbinical Association, we cry out in grief and pain at the senseless deaths of 11 people in Buffalo and Laguna Woods this past weekend. After we express our sorrow and our solidarity, we recommit to bringing to life a reality that counters the hatred and violence espoused […]