This article is a rough translation of a news article in German, originally published on Feb. 6, 2020 in Wiesbadener Kurier. 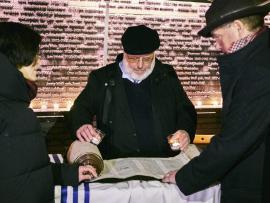 A Torah scroll in Michelberg for the first time in 80 years, read by Rabbi Dr. Walter Rothschild who served as the rabbi leading the liturgical parts of the service.

The community organized a commemorative event on January 27, the 75th anniversary of the liberation of the Auschwitz concentration camp. For the first time in 80 years, there was a Torah scroll at the former Reform synagogue in Michelsberg. The Torah is a document with the unvocalized Hebrew text of the five books of Moses, which is used for reading in Jewish services. For the memorial service, Leon Schwarzbaum made his Torah scroll, with which he survived Auschwitz, available to the congregation,

The re-emerging Jewish Community of Michelsberg is committed to the values of Progressive Judaism. These include gender equality, integration, democratization, greater self-determination and the adaptation of religion to the present. In addition, the community is already a member of the World Union for Progressive Judaism, the largest global umbrella organization for non-Orthodox Judaism. The origins of Reform Judaism can be found in Germany around the 18th and 19th centuries and also go back to ideas by Abraham Geiger, who worked as a rabbi in Wiesbaden.

Below: Community members assemble at memorial service, together with Prof. Dr. Birgit Klein (second from the right), a 2017 graduate of the Reconstructionist Rabbinical College and professor of Jewish history, who remembered Dr. Paul Lazarus, the last rabbi of the former Reform synagogue of Michelsberg before the Shoah. 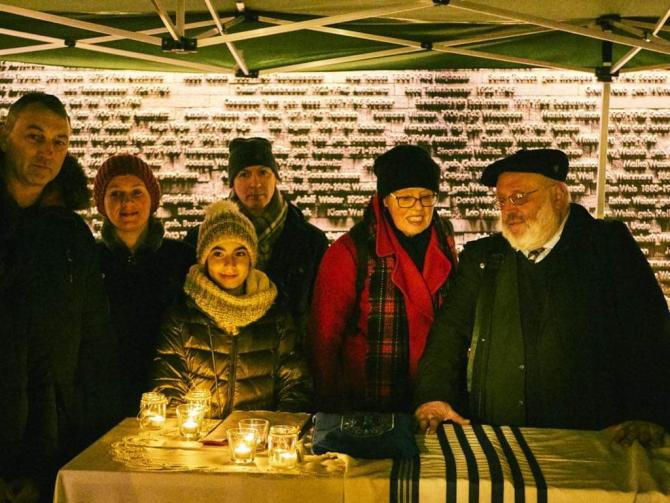