The following op-ed was originally published in Ha’aretz on January 30, 2017 at this URL: https://www.haaretz.com/opinion/.premium-1.768155
The article is shared with the kind permission of the author, Mathew S. Nosanchuk, a member of Reconstructionist congregation Adat Shalom and former liaison to the Jewish community under President Obama.

As Obama’s liaison to U.S. Jews, I know the importance of statements commemorating the Holocaust. Trump’s omittance of Jewish Holocaust victims while inhumanely slamming the door on those fleeing persecution captures his historical ignorance.

And on the Seventh Day: U.S. President Donald Trump continued his dyspeptic blitzkrieg to impose his dystopian vision of America through the cruel bludgeon of his refugee ban and his ban on entry by Muslims from seven Middle Eastern and African nations. The Seventh Day of his presidential administration, that is. He has yet to rest.

In the cruelest of coincidences (if it was a coincidence at all), the president issued two statements Friday, one pulling the plug with a cruel immediacy on the admission refugees and banning those individuals – primarily Muslims – from coming to our shores because we only should admit people here who “deeply love America,” while the other commemorates International Holocaust Remembrance Day by sanitizing the memory of Nazi atrocities, making no mention whatsoever of the Shoah’s Jewish victims.

Every constituency with which we engaged expected the president to weigh in on their key events with a statement. For the most significant ones in the Jewish community, I would take the pen at first and turn the draft over to the incredibly talented bullpen of presidential speechwriters, who would then (in executive branch-ese) “chop” on them, making them soar and sound in President Obama’s voice.

Of vital importance to the Jewish community were those statements commemorating the Holocaust – the Nazis’ brutal mission to liquidate the Jews of Europe that resulted in the murder of six million Jews. The major annual Holocaust commemorations included International Holocaust Remembrance Day, established by the international community to take place each January 27 to remind the world of the murder of six million Jews. The day includes events designed to commemorate and educate the global community with the underlying message of “Never Forget” and “Never Again.”

In drafting statements on Holocaust remembrance, I always and deliberately included a specific reference to the fact that the Holocaust is above all else a tragedy that befell the Jewish people. It is an event that carries profound significance for all of humanity, irrespective of nationality, ethnicity or religion and had many other victims as well. But conscionable remembrance acknowledges the Jewish victims. It would have been tone deaf and negligent for me to write a statement in President Obama’s name that didn’t mention the fact that Jews – as well as political prisoners, Roma and homosexuals – were  victims of the Holocaust.

Canadian Prime Minister Justin Trudeau learned this the hard way when his 2016 International Holocaust Remembrance Day statement took the purely “internationalist” approach and made no reference to the Jewish victims. My White House colleagues and I knew that if a statement on Holocaust remembrance issued in President Obama’s name omitted mention of its Jewish victims, he (and I as the person charged with keeping an ear to the ground in the community) would have been pilloried, and the lapse would have been seized on by the president’s detractors to corroborate their wildly erroneous belief that he was insensitive to the Jewish community, unsupportive of Israel or, even that he was somehow anti-Semitic. (To his credit, Trudeau tweeted later the same day about the importance of fighting anti-Semitism and linking to his original statement.)

During his final year in office, President Obama accepted Israeli Ambassador Ron Dermer’s invitation to speak at a ceremony commemorating International Holocaust Remembrance Day that took place at the Israeli Embassy. Presidents do not typically travel to embassies to give speeches, and no president had ever delivered at an address at the Israeli Embassy. President Obama’s appearance there was historic. Ambassador Dermer knew that and so did we, which is why any policy differences that might have existed between the Obama Administration and the Israeli government, were inconsequential and irrelevant to the solemn act of coming together – b’yachad – for Holocaust remembrance.

The occasion, however, ended up being an even more powerful occasion that any of us imagined. In addition to commemorating International Holocaust Remembrance Day, the event also honored – posthumously – several American citizens who risked their own lives to save Jewish lives during the Holocaust, and after a rigorous vetting process to ascertain the veracity of their stories, received the honor of “Righteous Among the Nations” from Yad Vashem, Israel’s Holocaust Memorial.

One of the honorees was Army Master Sergeant Roddie Edmonds, who was captured by the Germans in 1944 along with more than 1,200 troops under his command. When the camp commandant ordered the captured American Jewish POWs to line up, Master Sergeant Edmonds ordered all his troops to stand together and told the commandant “We are all Jews.” Edmonds refused to back down, and the German officer, unable to identify the Jews, relented. Edmond’s act of courage saved lives of some 200 Jewish soldiers. Edmonds’ son Chris, a Baptist preacher from Tennessee, recounted his father’s unsung heroism, rooted in his Christianity, with warmth and power. Sitting a couple of rows behind the President during the ceremony, I could see that our Commander-in-Chief was deeply moved.

The President Speaks at the Righteous Among Nations Award Ceremony

When it was his turn to deliver the keynote address, President Obama adlibbed, weaving Edmonds’ simple but profound declaration into his prepared remarks. Recognizing that the Holocaust was “a crime without parallel in human history” and that anti-Semitism and other forms of intolerance and hatred are on the rise in our times, he stated that “[a]n attack on any faith is an attack on all our faiths” and continued:

“For Americans, in particular, we should understand that it’s an attack on our diversity, on the very idea that people of different backgrounds can live together and thrive together.  Which is why –your father was right – we are all Jews… . When any Jew anywhere is targeted just for being Jewish, we all have to respond as Roddie Edmonds did – ‘We are all Jews.’”

When President Trump issues a statement that omits any mention of the Jewish victims of the Holocaust on International Holocaust Remembrance Day, a date – January 27 – that was chosen because it was the day on which Auschwitz, where evil and humanity conjoined to effectuate the mass murder of close to one million Jews, was liberated, he dishonored the memory of the Jewish victims of the Holocaust in favor of a boilerplate pledge to do everything in his power, “in the name of the perished … to make love and tolerance prevalent throughout the world.”

So should anyone be surprised when, on the very day when the world comes together to say “Never Again”, President Trump twice demonstrates his ignorance of history – first by issuing a thoughtless and self-aggrandizing statement on International Holocaust Remembrance Day that omits mentioning the Jewish victims and second, by signing his reckless, inhumane and un-American executive order slamming the door on men, women and children who are fleeing violence and persecution, and scapegoats millions of others by preventing them from traveling here because of their religion and nationality.

If “Never Again” and “Never Forget” mean anything, then let Americans of good conscience and character stand together and, with the same passion we saw in the streets of our nation’s capital and throughout America at the Women’s March, follow Sergeant Edmonds’s example:  “President Trump:  We are all Jews. We are all Muslims. We are all Refugees.”

From 2009-2017, Mathew S. Nosanchuk served in the Obama Administration in the White House Office of Public Engagement, on the National Security Council staff, and at the Departments of State, Justice and Homeland Security. 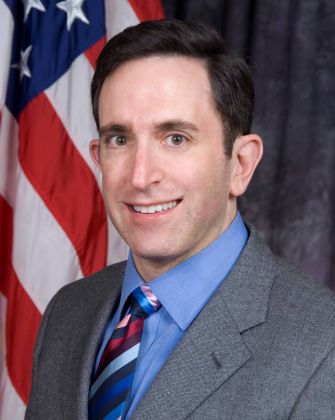