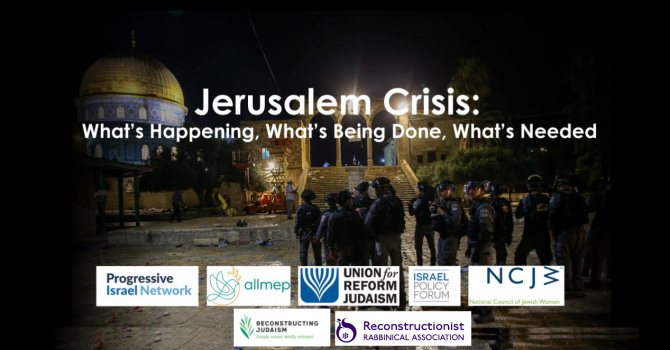 This conversation took place on Wednesday, May 12.

Recent days have seen an escalation in violence in Jerusalem, and sadly, violence has been flaring throughout today, Jerusalem Day. With the violent events at Al Aqsa mosque, police crackdowns on Palestinian protesters, the threat of home evictions in the Sheikh Jarrah neighborhood of East Jerusalem, and today’s incendiary Flag March, the city is in a state of crisis. Hamas rockets have fallen on Jerusalem and other parts of Israel and have been met by retaliatory attacks in Gaza. This is a highly volatile and dynamic situation — and we don’t know where it will lead.
Members of Reconstructionist communities and rabbis in the Reconstructionist Rabbinical Association are invited to join in an urgent webinar with leading experts:

Note: The views of the presenters are their own and do not necessarily reflect the positions of Reconstructing Judaism or the Reconstructionist Rabbinical Association.