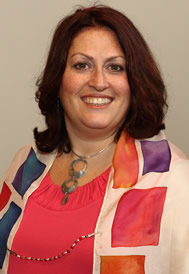 Executive Director of the RRA

Rabbi Wechterman came to the RRA as Executive Director in the fall of 2015.  She has brought a commitment to social justice, a passion for interfaith and inter-communal partnership and a deep respect and love for her Reconstructionist colleagues to the position.

Rabbi Wechterman created the RRA’s Office of Rabbinic Career Development in an effort to serve the professional needs of rabbis in any field of work.  She has also spearheaded a revised communications strategy and a renewed partnership with the RRC/JRC and other arms of the Reconstructionist movement.  Rabbi Wechterman also teaches Pulpit Supervision at RRC and serves as an informal advisor to many students.

Rabbi Wechterman was a founding faculty member of Camp JRF in the Poconos (now called Camp Havaya) and served on their summer faculty for many years.

Before coming to the RRA, Rabbi Wechterman served as spiritual leader of Congregation Agudas Achim in Attleboro, Massachusetts from 2001 to June of 2014. Additionally, she has taught at the college and adult level in many settings and worked broadly with children and families with special needs to create inclusive communities for Jews of all abilities and backgrounds.

Prior to serving a pulpit, Rabbi Wechterman was the or Director of Congregational Services at the Jewish Reconstructionist Federation and consulted with congregations throughout the movement on governance, growth, staffing and other congregational issues.

A graduate of the Reconstructionist Rabbinical College, Rabbi Wechterman brings an open and inclusive approach to teaching Jewish life and traditions.  She is committed to empowering Jews and fellow travelers on their individual and unique Jewish journeys.

During her tenure at Congregation Agudas Achim, Rabbi Wechterman has pursued a number of continuing education and rabbinic growth opportunities and was a member of the second cohort of START PEER (Program for Excellence and Education in the Rabbinate).  She is also a graduate of the Institute for Jewish Spirituality’s Rabbinic training program and received the Hassenfeld Award for Jewish Service from the Jewish Federation of Rhode Island for her leadership work in providing social services in the context of Jewish community. In 2014, Rabbi Wechterman traveled to India with the American Jewish World Service as part of a rabbinic delegation building social justice partnerships.

In Massachusetts, Rabbi Wechterman was active in interfaith work in the community, serving on the board of the Attleboro Area Council of Churches and participating in the monthly Interfaith Dialogues. She is a founding member of GAIN, the Greater Attleboro Interfaith Network, which works on fair an just policing in the Attleboro area. She was a regular participant in discussion forums, interfaith services and other programs that bring people together.

Rabbi Wechterman holds a BA in International Relations and BS in Journalism from Boston University. She lives in Abington, PA with her husband David Nerenberg and is the parent of two children, Avi and Sharon.

Purim: The Danger of a Single Story

This d’var Torah for Purim was originally posted on the J Street website on March 5, 2020 as The Two-Way Street | Purim: The Danger

The Poor People’s Campaign, a National Call for Moral Revival

The RRA recently became a partner of the Poor People’s Campaign (PPC). In the last two weeks the PPC has coordinated rallies and acts of civil disobedience in over 30 state capitals, including the participation of over 15 RRA members.