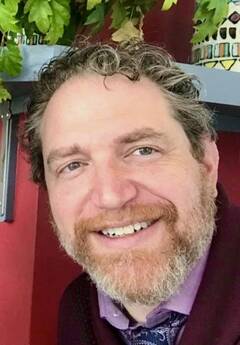 Rabbi Michael Rothbaum (he/him) is thrilled to join Bet Haverim as Chief Haver.  Ordained at the pluralistic Academy of Jewish Religion in New York (AJR-NY) in 2006, he graduated from the New College of Florida in 1997 with a BA in Public Policy/Economics.
Rabbi Mike was raised in Rockland County, New York just north of New York City. As a teenager, Rabbi Mike became involved in in the local NAACP and helped start his high school’s first Amnesty International chapter.  In retrospect, he has identified the Jewish imperative of r’difat tzedek – the command to pursue of justice – as the force that solidified his love of Judaism and his passion to become a rabbi.

After ordination, Rabbi Mike served students at Sarah Lawrence College and Purchase College as Campus Rabbi. He has worked in Jewish communities in New York, the Bay Area, and the Boston area for over 25 years, as youth director, rabbi/educator, and pulpit rabbi, as well as serving as Co-Chair of the Bay Area Regional Council of Bend the Arc: A Jewish Partnership for Justice.

Rabbi Mike has spoken and taught widely, addressing groups as varied as Moishe House, Jewish Community Relations Council, and “Nuns on the Bus.” He has appeared in front of audiences at the US Senate and House of Representatives, Oakland City Council, and the New York State Democratic Party. In 2012 he joined a rabbinic delegation to Ghana, sponsored by American Jewish World Service, and was named a Global Justice Fellow by AJWS in 2018.  His writing has been featured in Forward, Tikkun, Sojourners, Alma, Ha’aretz, and the anthology, Peace, Justice, and Jews: Reclaiming Our Tradition.

A proud alumnus of Seminary Summer, a joint project of the AFL-CIO and Interfaith Worker Justice, bringing labor organizers together with clergy, Rabbi Mike was also honored as the Gary David Kibblewhite lecturer at the Loft Community Services Center in White Plains, NY, as well as a speaker at the International Perspectives Forum in Westport, CT and the Paul Robeson Community Center at Rutgers University in Newark, NJ.  Rabbi Mike’s religious-based activism has been covered in several media outlets, including CNN, WABC-TV, and i24 Israeli television.

Devoted to creating and nurturing vibrant learning communities, teaching Torah that touches heart, mind, and soul, and continuing the Jewish mission he discovered as a teenager of pursuing justice, Rabbi Mike is a passionate advocate for the idea that every moment is an opportunity to make a Jewish choice.