Reconstructing Judaism recently commissioned two black Jewish artists from within our circles, Ayeola Omomara Kaplan, and Marjorie Salvodon, to respond to the Movement Wide Day of Learning on Reparations (link) through a piece of visual art.

Reconstructionists understand Judaism to be the Evolving Civilization of the Jewish people.  Art is just as much an authentic and invaluable expression of Jewishness as prayer or Torah study. There art pieces provide another civilizational entry point for engaging Jewishly with the complex and provoking topic of reparations, helping to deepen our racial justice education and commitments in a Reconstructionist fashion.

These two pieces will be installed in the permanent collection at our building, 1299 Church Rd, this September, and you are also able to purchase “sibling” prints of the original pieces below for your home, office, or community. 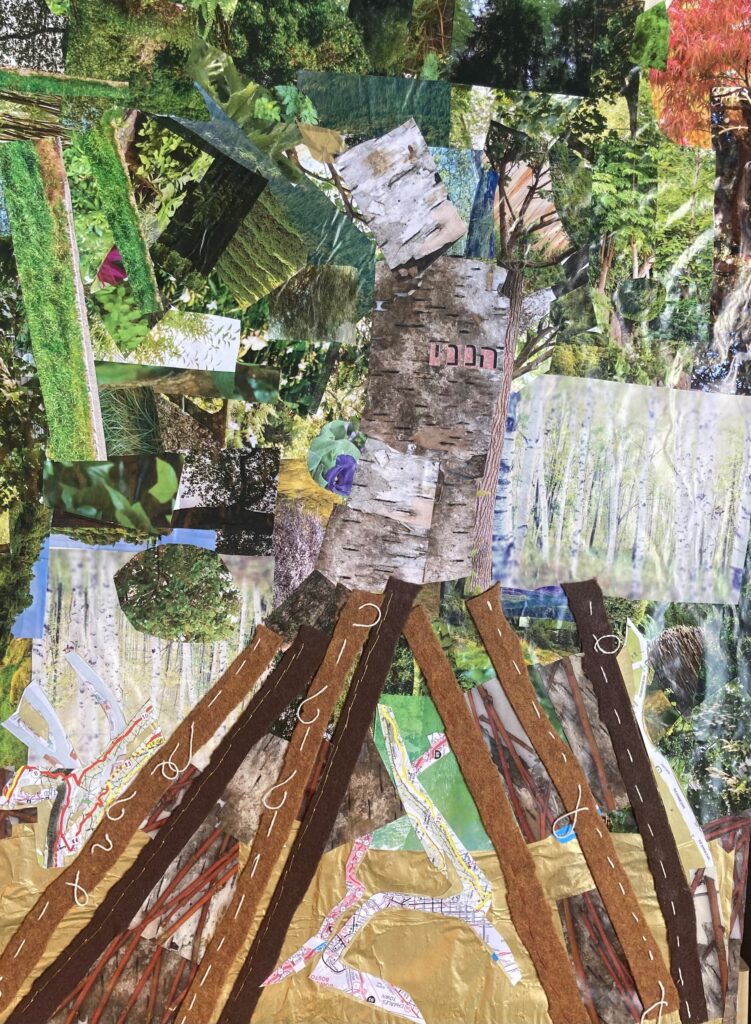 “Hineni | הנני: Belonging, Memory, Action” was created in response to Reconstructing Judaism’s “Day of Learning on Reparations” on August 8, 2021.

This collage is inspired by a pivotal moment in the story of liberation my father would tell us about the struggle for Haitian independence. After his capture by Napoleonic forces in 1802, Toussaint Louverture, one of the leaders of the Haitian Revolution, reportedly said: “En me renversant, on n’a abattu que le tronc de l’arbre de la liberté des Noirs; il repoussera par les racines parce qu’elles sont nombreuses et profondes.” [In overthrowing me, only the trunk of the tree of Black freedom has been cut down; its branches will shoot up again, for its roots are numerous and deep.] Each time this story is told and heard, our belonging expands because this foundational moment in Haitian history calls for collective consciousness, no matter where we come from, no matter where we live.

The tree is a powerful symbol of freedom, endurance, and life. Trees are centered in the collage: disarticulated, cut down, topsy-turvy, turned sideways, with tree trunks, leaves and branches akimbo. To hear this story of Louverture’s words is to face the history of systemic colonial violence against people of the global majority (BIPOC), which has included land theft, lynching, burning, torture, colonization and enslavement. To hear this story is to face the ways that the socio-economic-political structures of our twenty-first century society stem from an extensive record of violence against bodies that have been marginalized for too long. This history of violence is our inheritance, but so is the history of liberation.

In this piece, I attend to the roots of words through the roots of trees. Reparation means repair: the act of restoring what has been undone. To put together what is torn or broken. To mend. To patch. To rebuild. To set right. To remedy. With my hands, with our hands, we can connect pieces that have been separated. We unsew the nooses of thread, the nooses of terror and subjugation. We flatten the generational tides of impoverishment. We reject the denial of our humanity. Instead, we nourish the tree of freedom. We stand for dignity when we show up, when we heed the call to action, when we do teshuvah. When se say hineni, we are another root, or branch, budding from the once-chopped down tree.

I made this collage on the ancestral lands of the Massachusett, Nipmuc and Wampanoag Peoples, as I remain in solidarity with them and their ancestors, in recognition of their stewardship of the land on which I now live and work. 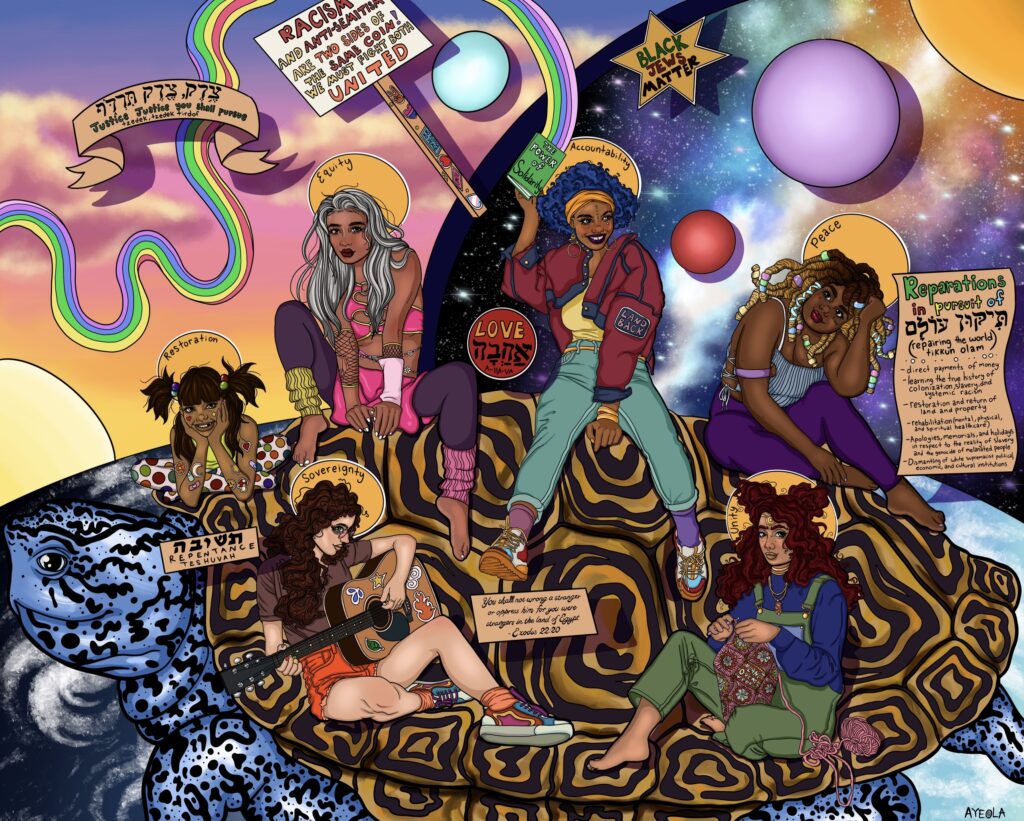 Ayeola Omolara Kaplan
Reparations in Pursuit of Repairing the World

In creating this work, I wanted to dream about the euphoria that could be experienced through unity amongst the global community of marginalized people. It is my belief that the terrors that Jewish people face come from the same source as the terrors that Black brown and indigenous people face. In recognizing this united struggle, our strength and chance of victory against hate and oppression increase spectacularly. When we recognize the deep links between all people facing the threats of white supremacy, take time to understand each other and fight for each other, racism and anti-semitism won’t stand a chance. As much as the fight for reparations will take all of our collective solidarity, it will also require our collective spiritual conviction. I think that when our struggle transforms into a divine fight, guided by our promise to pursue justice, our success is only a matter of time.

In ‘Reparations in Pursuit of Repairing the World,’ I wanted to amplify the divine energies needed in building a real path towards tikkun olam. These divine energies are personified as restoration, equity, accountability, peace, sovereignty, and unity. The figures are given halos to represent their ethereal and spiritual nature. They are all on the back of a turtle, resting on Earth, symbolizing the indigenous concept of Turtle Island. I wanted to personify the land in order to suggest that the fight for justice is not just for the wellness of people, but also for the wellness of the Earth. Throughout the piece, there are floating strips of text, and signs that express the links between justice work and Jewish practice. I also included orbs in the sky which represent the planets, as well as the atoms which make up everything. With this, I wanted to honor the divinity within and all around us, indicating that we are never alone in this fight. This whole universe is an intricate and beautiful creation, just like us. We can find so much joy and beauty in our creation as beings committed to building a harmonious and just reality. From the life blood coursing through our veins, to the rivers on the earth, to the rainbows in the sky, to the streams of stars in our galaxy, we all play a role in our collective healing. A great deal of the piece was created intuitively, so I invite you to play with any of the imagery in the painting and intuitively develop your own ideas about what the scene means to you. It is through the celebration of everyone’s unique life experiences and perspectives that we can find our own particular ways of contributing to reparations.