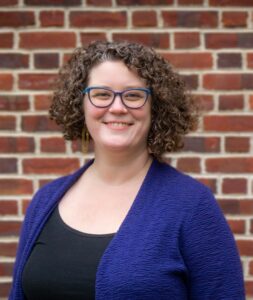 Rabbi Miriam Geronimus was ordained by the Reconstructionist Rabbinical College in May 2021. She grew up in Ann Arbor, MI, in a Secular Humanistic Jewish family. Having spent three summers studying Yiddish language, history, and culture, she views cultural expressions of Jewishness as an important part of the tapestry of Jewish tradition and peoplehood. She graduated from Princeton University in 2012 with a Bachelor of Arts in Ecology and Evolutionary Biology. Ecology continues to inform how she understands the world and is an important part of her spirituality and political work. Her innovative project continues her work from previous years: she is the founding rabbi of the Cleveland Jewish Collective, a progressive Jewish community in Cleveland, OH, that is rooted in relationship. She is committed to co-creating a community that reflects and celebrates the diversity of the Jewish people and fellow travelers. She draws on experience working with queer folks, interfaith families, and people with disabilities. 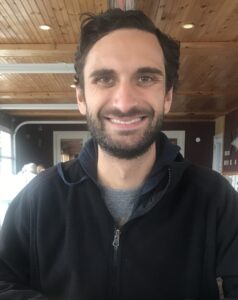 Solomon Hoffman is set to begin his senior year at the Reconstructionist Rabbinical College, where he has received recognition for his academic writing, study of Jewish music and service to the community. He also completed a year-long chaplaincy residency in the Mount Sinai Health System as part of his path towards the rabbinate. He is beginning his fourth year as the Rabbinic Leader for Mishkan Ha’am, a Reconstructionist community in Westchester, N.Y. Solomon grew up in Port Washington, N.Y., attending the Reconstructionist Synagogue of the North Shore (RSNS). Since 2014, he has been an educator and musical director there, working with learners and musicians ages 2 to 90. He is passionate about creating new musical prayer experiences and is working to create an album of original liturgical music. A video for his setting of Psalm 147, “Harofei,” has been played in services around the world and was profiled by the public radio program “Interfaith Voices.” Solomon has composed and arranged music for a variety of theater, cabaret and dance projects, and he is the founder of The Songwriter’s Orchestra. He graduated from Columbia University with majors in music and psychology. Solomon lives with his partner, Lauren, in Washington Heights.

Solomon’s Auerbach project will offer a deeper exploration of new Jewish liturgical music by curating conversations with composers about their creative processes and spiritual journeys, and unpacking the richness of the ancient Jewish liturgy that is sparking new musical interpretations. It will offer multiple avenues for people to deepen their connection to contemporary Jewish music and Jewish prayer as a spiritual practice. The project will include podcast episodes, live concerts, virtual gatherings and a website. 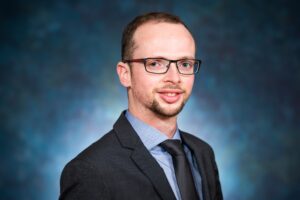 Armin Langer is an incoming DAAD Visiting Assistant Professor at the University of Florida’s Center for European Studies. He graduated from the Reconstructionist Rabbinical College in 2022 and holds a Ph.D. in sociology from the Humboldt University of Berlin. He held academic appointments at Brandeis University and the University of Virginia, and worked in rabbinic functions at Congregation Am Haskalah in the Lehigh Valley, Pa.; Congregation Beth Am in San Antonio, Texas; and various Jewish communities in Europe and Mexico. He has published two books, an edited volume and several articles on antisemitism, racism, migration and acculturation. His personal website is: arminlanger.net

In May 2022, with the generous support of the Auerbach Ignition Grant, Armin organized and led a Shabbaton in Mexico City. The Shabbaton’s core program was a text-study and discussion on Mexican Jewish identity/identities, questions around belonging to Mexico and the Jewish people, and the relationship to the Land and the State of Israel. The workshop made use of a Reconstructionist approach to text study, encouraging participants to learn through a Reconstructionist lens. The Shabbaton also included a communal seudah shlishit (third meal) and a Havdalah ceremony. The event took place in cooperation with the local branch of the Moishe House network. Armin and the organizers hope to be able to continue these Shabbaton events and are looking for funding for future programing. 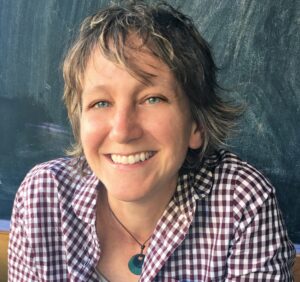 Nicole Fix is a rabbinical student at the Reconstructionist Rabbinical College. She is deeply committed to the expansion of Jewish engagement through the arts. Her writing has appeared in publications such as Monday Night Press, Nimrod International Journal for Prose and Poetry, Post Road Magazine, GO Magazine and Ritualwell. Nicole is a founder of Page 73 Productions, an award-winning New York City-based theater company. During her time in rabbinical school, Nicole has worked for the School for Creative Judaism and The New Shul and is currently an intern at the Center for Small Town Jewish Life in Maine. She was a T’ruah Rabbinical Student Fellow and an iEngage Fellow at the Shalom Hartman Institute. She holds a BFA from New York University’s Tisch School of the Arts and an MFA from the Yale School of Drama.

The Rabbinic Arts Salon will engage area artists in an intensive Jewish text study and craft development salon. Artists will meet six times throughout the academic year. Together, we will delve deeply into classical texts around the theme of creation through destruction. The primary purpose of the salon is for artists to create short works that can be performed in a Cabaret-style evening. The performances will be further developed, rehearsed and presented the following year.

Compelled by the transformative power of intentional community, Rebecca Van Wagner seeks to cultivate deep community across a variety of backgrounds. Her project, Shema Sessions, is a framework for synagogues to host small-group self-facilitated question sessions for members to get to know each other, with a focus on mixed-faith couples. Rebecca is in her second year of study at the Reconstructionist Rabbinical College. Outside of the classroom, Rebecca loves to spend time in nature, study Torah with the South Philadelphia Shtiebel and experiment in the blacksmithing forge.