Being Part of the Universe

Let us begin by remembering that the spiritual always points toward the unity of things, not their division. Judaism tries to help us to work from a higher perspective. To celebrate the creation of the world, as we do on Rosh Hashanah, is to see ourselves as an integral part of all that is and not to see ourselves as the measure of all things. The egotistical, self-centered part of our mind, “the evil urge” if you will, always leads us to experience our separateness from the natural world. When we see ourselves as part of creation, born primarily to tend the Garden and nurture it, then we will be acting out of our higher selves.

Rosh Hashanah is a call to reintegrate ourselves into the fabric of the natural world and to do our part to preserve the universe out of which we come.

A word from Nahman of Bratslav. “The world was created only for the sake of the choice and the choosing one. We as masters of choice should say; The whole world has been created for my sake. Therefore, I shall take care at every time and in every place to redeem the world and fill its want.”

The following message by Mordecai Kaplan to the young people of his newly established synagogue, The Society for the Advancement of Judaism, beautifully and simply captures the essence of the Rosh Hashanah spirit. It appeared in the S.A.J. Review, Sep 11 1923.

My Dear Boys and Girls:

I wish you all a happy New Year. May the coming year not alone bring you happiness, but also enable you to make others happy, your parents your relatives and your companions.

Making others happy is no easy matter. It is an art that requires a great deal of study and practice. You probably do not suspect the true name of that art. It is religion. To be sure, a great deal of what people call religion leaves them unhappy, and often helps them to make others miserable. But that is only imitation religion, and not the real thing. All real religion, like the Book of Psalms, begins with ‘asharei’ which means, ‘O What happiness’ and ends with ‘Hallelujah’, which is a song of rejoicing.

We have established the S.A.J. for the purpose of learning the true Jewish religion the religion of our fathers. In that way, we expect to learn the art of being happy, and making others happy. May I count upon you to be loyal to this purpose which we have set for ourselves? May I expect that you will help us with your readiness to carry out the little tasks we assign to you? May I hope that you will display a loving interest in all that is truly Jewish, spiritual, and ennobling? Why certainly!

Making others happy is no easy matter. It is an art that requires a great deal of study and practice. You probably do not suspect the true name of that art. It is religion. To be sure, a great deal of what people call religion leaves them unhappy, and often helps them to make others miserable. But that is only imitation religion, and not the real thing. All real religion, like the Book of Psalms, begins with ‘asharei’ which means, ‘O What happiness’ and ends with ‘Hallelujah‘, which is a song of rejoicing.

In this passage from Mordecai Kaplan’s Diary, he explains the meaning of Rosh Hashanah as Yom HaZikaron. We can feel his delight in having thought of the explanation shortly before he gave the sermon. He also hints at but does not completely explain the central notion of the Kingship of God which is so important on Rosh Hashanah. In other places Kaplan explains and reinterprets the notion of God’s sovereignty as meaning that we must not act as if our own will were the supreme law, but we must submit to a higher law which is the law of justice righteousness and love. To submit to that law is to accept the sovereignty of God.

The sermon today on “The Quest for Universal Peace” was highly successful. There were not two opinions about it. In the introduction I pointed out that of all the holidays in our calendar Rosh Hashanah is the only that is not designated in the liturgy by the same name as in common parlance. In the liturgy it is called [Yom HaZikaron] as it is in the Torah where the term Rosh Hashanah is not to be found. Originally the [Yom HaZikaron] was celebrated not as marking the beginning of a new year but as the beginning of the seventh month. Seven seemed to connote for our ancestors completion or fulfillment. The fulfillment in question was that of God’s power in the world. The term [Zikaron] is therefore not to be understood as “memorial” or “remembrance” but as “proclamation.” God is to be proclaimed king by means of the shofar. The [Yom HaZikaron ] is thus the equivalent of “I am an American day.” It means “I am a world-citizen day,” “I am a subject of God’s Kingdom” day. That’s the kind of a notion that delights me and gives propulsive power to the talk that I gave. This is especially the case when I hit upon the notion shortly before I give the talk. If premeditated too far ahead of time it loses its “kick.”

The diary entry is from “Communings of the Spirit: The Journals of Mordecai M. Kaplan, 1913-1934”, edited by Mel Scult. 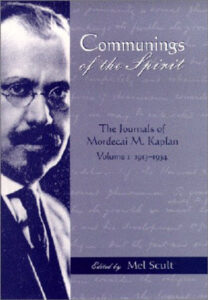