Shabbat for a Fair Trade Cause 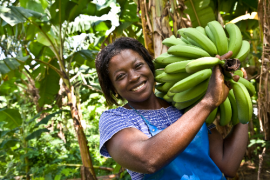 On the Friday night before World Fair Trade Day, people from across Philadelphia gathered in the reception hall of the Philadelphia Ethical Society for a night of Jewish learning, locally-sourced food, and provoking conversation about ethical purchasing. Inspired by her work in our Fair Trade Reconstructionist Learning Network, Jessica Herrmann, team leader at Repair the World Philadelphia, crafted a Fair Trade Shabbat dinner to coincide with the worldwide celebration. World Fair Trade Day, which occurs annually on the second Saturday in May, celebrates fair trade learning and practice. For many Jewish communities across North America, the holiday offers a chance to take a closer look at Jewish values present in fair trade, and Repair the World’s Fair Trade Shabbat dinner took this opportunity in stride.

Attendees at the dinner included representatives from partner organizations as well as people ranging across age, racial and religious demographics. All shared the common drive to learn more about sustainability and workers rights through the fair trade movement, and share these learnings with their respective communities. The programming began before we sat down, as everyone was invited to draw a country name from a bag to determine which table we would sit at. Each table represented a different country from which fair trade products are sourced, from Mexico to India to Nepal.

Once everyone was seated randomly at their country’s tables, Jessica introduced a fair trade version of “Heads Up” to help people get to know each other and become familiar with the extent of fair trade products available, which range from bananas to sugar to kippot. People expressed surprise at how far fair trade stretched into the needs of Jewish life, as resources from Fair Trade Judaica highlighted the wide range of Judaica products and holiday-related food items available. 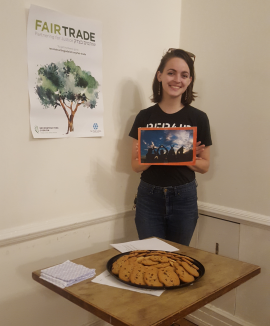 Before Shabbat dinner was served, the program leaders read a kavannah about food justice. This reading, written by Dasi Fruchter, Director of Tav/Food Justice Community Engagement at Uri L’Tzedek, provided a poignant reminder of the labor involved in bringing food from its source to our tables.

After dinner, several local fair trade entrepreneurs and leaders, including Yoko Koike Barnes from Fair Trade Philadelphia, Grace Gardner of Grace’s Guatemala Goodies and Joe Cesa from Philly Fair Trade Roasters, described their experiences working with and organizing around fair trade. They recounted how their personal journeys through coffee plantations in Central America and supermarket aisles in the U.K. brought them to a place of deep passion and justice for fair trade and its mission.

As the night came to a close, attendees revisited the connection between Jewish values and fair trade. Repair the World organizers set up four “dessert stations,” each of which featured a picture representing a fair trade principle: paying fair and timely wages, respecting cultural identity, prohibiting child labor and promoting gender equality, and supporting community development. Organizers led a discussion at each station, illuminating the link between Jewish values—including tzedakah, tzelem elohim (sanctity of all humans), umot ha-olam (respect for other nations), and halanat sachar (paying wages in a timely manner)—and fair trade values through traditional Jewish texts and teachings. The night ended with a round of thank-yous for the organizers, partnering organizations, and those in attendance who came to learn and share, driven by a sense of urgency for taking steps to fight injustice.