And She Persisted: One Trailblazing Rabbi Rescues the Story of Another From History’s Ashes

“Some parents did not see the point of their daughters studying Torah. But Regina persisted. She told them ‘There have been lots of strong Jewish women. Miriam, Deborah and Esther were leaders from the Bible, brave and wise. Your daughters can do great things someday, too.’” 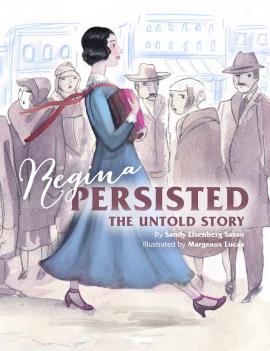 Rabbi Sandy Eisenberg Sasso, RRC ’74, knows what it means to make history. Her newest children’s book, Regina Persisted: An Untold Story, reclaims a story lost to history. The book also provides adults and children a portrait of a strong woman driven by her love of Judaism.

In the process of writing the book, Sasso invariably echoed and confronted her own place in history: She’d never set out to be a pioneer, she merely knew she had to be a rabbi.

The rabbi emerita of Congregation Beth-El Zedeck in Indianapolis was the first woman to become a Reconstructionist rabbi, and as far as she knew, the second woman ever to be recognized as a rabbi. (The first was Sally Priesand, who was ordained by the Reform movement in 1972.) During the course of her studies at the Reconstructionist Rabbinical College, she married her classmate, Dennis Sasso. When the Sassos graduated, they became the world’s first married rabbinic couple. Later, she was the first rabbi to give birth to children (David and Debora.) 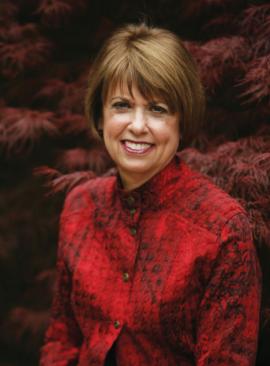 A Philadelphian, she was inspired to attend RRC, which was founded 50 years ago based on Reconstructionist philosophy. From the outset, the institution’s commitment was to train female rabbis.

“I was very in tune with the philosophy of Mordecai Kaplan and Reconstructionism,” recalled Sasso. “I was fascinated by the civilizational approach to Judaism, which gave me a strong sense of historical time. I couldn’t imagine being anywhere else. RRC gave me the feeling that I could fit in, that I could have a place. Mordecai Kaplan would come in, teach a class and take a nap in Dennis’s room. He would ask us, ‘What is the essence of religion?’ His answer still resonates. Emphatically he taught, ‘The essence of religion is responsibility.’ ”

Being a trailblazer wasn’t always easy; while Sasso was generally embraced by her classmates and faculty, many in the wider Jewish community weren’t as open and welcoming.

“I received a letter after speaking at an American Jewish Committee event. The person said, ‘I normally sign my letters by wishing success, but in your case, I won’t. I hope you don’t make it for your sake, my sake and Judaism’s sake,’” recalled Sasso.

In the beginning, she confronted opposition. “The first question I was asked by one rabbinic selection committee was what happens if you get pregnant? There was nothing about my vision for the congregation. Time and again, I was confronted by opposition, by people who thought I would change my mind.” And while there are striking examples of strong female leaders in Jewish sources, she forged this path without an example of a female rabbi to draw upon.

Yet she persisted, building a career that included leading Congregation Beth-El Zedeck in Indianapolis alongside her husband, and becoming a noted author of children’s and adult books and community activist. After 36 years as rabbi there, Sasso co-founded Women4Change Indiana, a nonpartisan organization that empowers women to lead in the field of civic affairs, and created the Religion, Spirituality and the Arts Initiative, now at IUPUI Arts and Humanities Institute.

“I was so concerned that if I didn’t succeed, it would impact the future of women in the rabbinate,” said Sasso.

However, in 1991, history would be rewritten. Following the fall of the Iron Curtain, a German-born researcher at St. Mary’s College of Maryland made a startling discovery. A woman named Regina Jonas had apparently been ordained in Berlin in 1935, making her the first woman rabbi. (Some scholars point to other women in history, ranging from the Talmud to the present-day, who possessed quasi-rabbinic authority or may have functioned as rabbis without the formal title or recognition.)

In 1942, Jonas was deported to Theresienstadt, where she taught, counseled and instilled a sense of Jewish pride in the bleakest of circumstances. Despite the fact that she worked alongside luminaries who survived the war, including the psychotherapist Viktor Frankl and Rabbi Leo Baeck, Jonas’s story of perseverance and heroism was lost to history. As Sasso put it, when Jonas was sent to Auschwitz and killed in 1944, she suffered a double death: the death of her body and the death of her story.

Years later, Sasso took part in a mission to honor Jonas in Prague and Berlin, organized by the Jewish Women’s Archive and American Jewish Archives. (Click to watch “Short Film: In the Footsteps of Regina Jonas”, by the Jewish Women’s Archive.) She was joined by the Reform Movement’s Rabbi Priesand; Rabbi Amy Eilberg, the first woman ordained by the Conservative movement; and Rabba Sara Hurwitz, the “open Orthodox” spiritual leader who received ordination from Rabbi Avi Weiss. The group dedicated a plaque in Jonas’s honor at Theresienstadt. 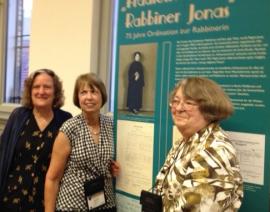 “Rabbi Jonas could have been the first and the last woman rabbi, but she wasn’t,” Sasso wrote in a blog post at the time. “She was the first in a long chain that continues. She may not have known it at the time, but she started what would become a revolution. We, who are her successors, owe her our gratitude and our voice.”

In a recent interview, Sasso added that she was “blown away by this story. People had buried it. So many stories of women have been lost. We don’t know their names. We don’t hear their voices.”

Sasso returned from the Jonas dedication ceremony convinced that more people needed to hear Jonas’s story—children most of all. Doing so would present many challenges. Can you even tell a children’s story where the hero meets such a tragic end? How much of the complex history of Germany of the 1930s could the story convey?

“I just felt it would have a wider audience if it were a children’s book,” she said. “Rabbi Elisa Klapheck wrote a wonderful biography. It helped me tell the story, to catch a glimpse of her character, as well as her journey. The whole idea of a woman persisting today is tremendously relevant.”

Writing about a historical figure also represented something of a departure for Sasso. Many of her children’s books, such as God’s Paintbrush, For Heaven’s Sake and God In Between, tackle profound spiritual questions that children often ask, but which many adults often have a hard time answering, partially because parents aren’t always sure of their own beliefs. It’s a shared experience for many; the audiences for these books have extended beyond the Jewish community.

Regina Persisted: An Untold Story, like her 2015 book Anne Frank and the Remembering Tree, has an intensely Jewish focus. Still, Sasso is convinced that “the subject of woman persisting against all odds will resonate with anyone.”

The resulting illustrated biography was published this month by Apples and Honey Press. Illustrated in a naturalistic style by Margeaux Lucas, the character-focused story brings Jonas to life. It’s hard for the reader not to root for Jonas as she battles intolerance, inspired by biblical heroes such as Miriam, Deborah and Esther.

It’s definitely not a Holocaust story, although an addendum goes into the details of Jonas’s fate.

“It offers an optimistic view of humanity,” said Sasso. “The writing was a long process. I struggled to capture her character, her personality. In the end, it was a story of one woman persisting against great odds and following her dream.” 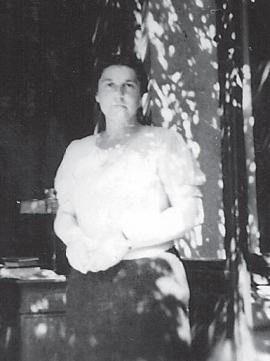 The afterward also includes a rare photograph of Jonas that Sasso discovered in a serendipitous conversation with Rabbi Amy Small, RRC ’87. Previously, scholars had only known of one image of Jonas to survive the Holocaust. Small had been given a second photo of her by a survivor who had been inspired by Jonas as a young boy.

“As you explore something more deeply, you continue to make these amazing discoveries,” said Sasso.

What’s next, now that the book is done? Well, since officially retiring from Beth-El Zedeck, Sasso has been as busy as ever. In addition to her involvement with Women4Change, she directs the Religion, Spirituality and the Arts program at Indiana University-Purdue University Indianapolis. And, of course, she’s writing.

Sasso is currently collaborating with Vanderbilt University scholar Amy Jill-Levine, Ph.D., an expert on Christianity and the New Testament who happens to be Jewish. Historically, some of the parables of the Gospels have been interpreted by Christians in an anti-Semitic light. The duo is attempting to use children’s books to ensure that Christian children don’t grow up with distorted senses of Jews or Judaism. So far, they’ve published The Marvelous Mustard Seed, based on Jesus’ parable of the mustard seed, and Who Counts Who Counts? 100 Sheep, 10 Coins and 2 Sons. Who is My Neighbor? is slated for release in Spring 2019.

Sasso says that all of her work is guided by a passion for teaching, a love of Judaism and a desire to help all develop their sense of spirituality.

“I love writing and talking to kids about big ideas that can lead to ongoing conversations,” she said. “Kids are ready for serious conversations. You don’t need to simplify the concepts, just the language.”