Bryan Schwartzman utilizes his background in journalism, media relations and development to advance Reconstructing Judaism’s messaging and storytelling. An award-winning journalist, he spent a decade reporting for the Philadelphia Jewish Exponent and has written for a variety of Jewish publications including the Forward and the Jerusalem Post. Prior to joining Reconstructing Judaism, he was the manager of marketing and communications for the Evans Consulting Group, which specializes in guiding nonprofit fundraising campaigns. He also writes short fiction and has been nominated for the Pushcart Prize.

Bryan earned his bachelor of arts in English and Journalism at the University of Massachusetts at Amherst and his master’s degree in modern Jewish studies at the Jewish Theological Seminary in New York. 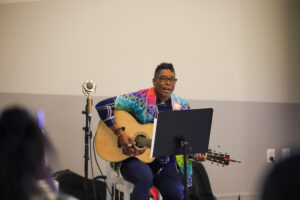 By the standards of geology, 100 years is a nanosecond. Yet stretching farther than most human lives, a century tests the limits of human perspective. In 1922, thanks to the ratification of the 19th amendment, American women had just gained universal suffrage (though it would be decades before many women of color could exercise that right in practice). Also that year, the first radio was installed in the Harding White House, the Lincoln Memorial was dedicated, and construction began on New York’s Yankee Stadium.

National Endowment for the Humanities Funds the Center for Jewish Ethics for Groundbreaking, Project on Race, Racism and American Judaism

The Center for Jewish Ethics at the Reconstructionist Rabbinical College has received a transformative grant from the National Endowment for the Humanities (NEH) to fund cross-disciplinary research into race, racism and the American Jewish experience. The center’s aims have an impact far beyond the academy by developing educational materials and programs for youth, individual adult learners, and communities.
The one-year, $199,850 grant will enable the Levin-Lieber Program in Jewish Ethics to establish and run a new initiative tentatively called “Race, Religion and American Judaism: Cross-Disciplinary Research, Public Scholarship and Curriculum Development.”

For 20 years, Ritualwell has served as a pioneering resource for original Jewish liturgy and rituals, along the way nurturing an informal network of liturgists, poets and ritual innovators. Now, it has launched ADVOT @ Ritualwell, a formal online community offering unprecedented support and empowerment to writers who are imagining new ways to mark life’s most salient moments in a Jewish context.

The first American bat mitzvah took place nearly a century ago, but its effects reverberate to this day. This podcast episode explores how the bat mitzvah helped pave the way for greater inclusion of women in public Jewish ritual and practice and laid the groundwork for further steps toward inclusion.