How Judaism Elevates Modern Discourse: The Topic at the Table for Chesapeake Day of Learning 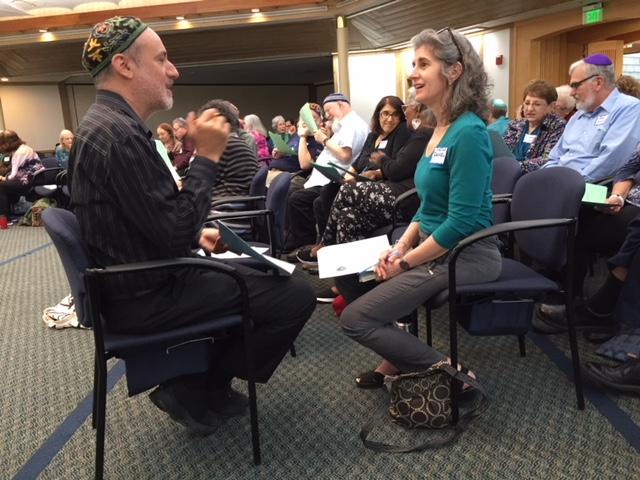 When engaging in difficult conversations, particularly when it comes to areas of intense political debate, it helps to set some ground rules: assume the best intentions in the other, be careful how you phrase questions and begin with areas of agreement. 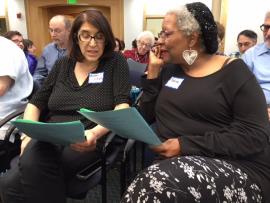 Throughout its history, the Reconstructionist movement has placed a high value on nuanced, reasoned discussion and has sought to uplift a wide range of perspectives. In today’s hyper-partisan era—in which many get their news from social media and avoid opinions that differ from theirs—it’s become extremely challenging for substantive and productive dialogue with others who hold differing views on hot-button issues like Israel, race relations and immigration.

Rabbi Saul Oresky, RRC ’13, religious leader of Congregation Mishkan Torah, who co-led a workshop on constructive dialogue, said there is reason to be optimistic about social discourse. He pointed to the Mishnah’s record of disputes between the ancient rabbinic sages Hillel and Shammai. Despite grappling over key points of Jewish law, the two sages and their students are portrayed in rabbinic literature as paragons of civic dialogue. The Mishnah records that their arguments were for “the sake of heaven.” (In fact, the Talmud continues, Hillel’s opinions won the day because his students made sure to teach their opponent’s viewpoints, as well as their own, honoring them even in disagreement.)

“Tradition shows us we can have discussions about life-and-death matters on which we disagree,” said Oresky. “We are just not modeling it very well these days.”

The workshop was co-led by Susana Isaacson, an Adat Shalom member and self-described liberal who is active in the group Better Angels, a bipartisan organization that seeks to bring liberals and conservatives together in conversation. According to its website, the group seeks to help people “better understand each other, to absorb the values and experiences that inform our political philosophies, and to ultimately recognize our common humanity.” (For the record, while most of the people at the workshop identified as liberal, a few identified as politically conservative.)

Isaacson shared that it has been particularly hard to convince conservatives to become involved. But she’s found inspiration in the meetings that have happened, as each side addressed the stereotypes and preconceptions held about the other.

“This kind of dialogue requires kindness. It does not require being outraged all the time,” said Isaacson, who noted she has had longtime friendships disrupted by political difference. “It hasn’t been all ruined. It is not all lost. People are having difficult conversations.” 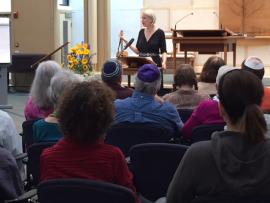 Encountering the other requires individuals to bring their best selves to the table and to have done a lot of prior work on their own character traits, according to Rabbi Nancy Fuchs Kreimer, Ph.D., who directs the Reconstructionist Rabbinical College’s program for multifaith studies. Her keynote talk was titled “Difficult Conversations: Cultivating the Virtues We Need.”

In the years since the Sept. 11, 2001 attacks, Kreimer has emerged as a pioneer in Muslim-Jewish encounters, facilitating numerous retreats involving Islamic and Jewish scholars and religious leaders. Yet her address at the conference focused less on this narrative and more on how she has mined Jewish tradition to cultivate and aspire to the characteristics necessary to engage in such challenging work.

Specifically, she spoke about her study of mussar, a Jewish approach to ethics and personal behavior that was developed in yeshivahs in 19th-century Lithuania. Today, the study and practice of mussar have become more prevalent in progressive Jewish communities, though its ideas are still not widely known. Mussar students engage in a series of contemplative practices, exercises and study in order to live more ethical lives.

“Everyone is trying to find meaning in this messy life,” said Kreimer, arguing that while the study of mussar might not make people smarter, it might make them kinder and more empathetic.

An aspect of studying mussar involves self-exploration and getting to know one’s yetzer hara, or “evil inclination.”

“You don’t get rid of it. You get to know your yetzer hara. You find out how it works in your life,” she explained. “This is a lifelong project. None of us gets to do it perfectly. If we didn’t have anything to learn, we wouldn’t be here.” 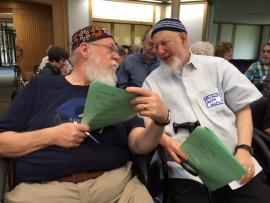 Participant Maureen Callanan, who is enrolled in Miskhan Torah’s conversion class, called the program “a great meeting filled with goodness and respect for each other.” (As someone exploring Judaism, she said she has felt embraced by her Reconstructionist community.)

Callanan who noted that she leans conservative on some issues and liberal on others, said her biggest takeaway was one of the simplest points: assume good intentions. After all, she said, “assuming others want to hurt you is not a good way to start a conversation.”