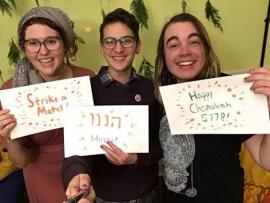 After interviewing dozens of social entrepreneurs, I’m confident in identifying one quality they all share. Grit. Along the way, I’ve understood grit as the self-discipline to buckle down and do whatever is needed, including the tough and the tedious, to achieve a worthy vision.

But I’ve learned I was wrong from a serial entrepreneur, full-time Reconstructionist rabbinical-school student and web designer with multiple part-time jobs, who is launching a new venture: Ariana Katz.

The fuel that keeps entrepreneurs going, long after they experience disappointment and exhaustion, is not the self-discipline to do what it takes.

According to Ariana, “It’s love.” 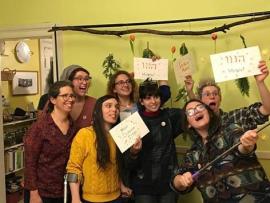 Agreeing on the name for their community, Hinenu, meaning “Here we are”

Last year, with support from the Reconstructionist Rabbinical College’s Auerbach Innovation Grant, Ariana successfully launched the Kaddish podcast. By tackling what she understood as a taboo subject, death, she built a community of more than 10,000 listeners. The podcast was a powerful gathering space for exploring the pains and triumphs of loss. “I loved the people and their stories,” she reflects.

Today, as she launches a new community, Hinenu: The Baltimore Justice Shtiebl, where people meet face to face to bring their whole selves without judgment to blend their political and spiritual lives, Ariana explains, “What’s love got to do with it.”

“We are all b’tzelem elohim [in the image of God],” she says. “When you see people in that way, it is easy to fall in love. You hear their stories and value their character, and then you love.”

With pride, she describes the people and the vision of Hinenu. “They want to be there for each other. They want to show up in sickness, for shiva and for the joyous moments. We are creating a radically inclusive community that shows up for all those moments with our full selves.”

The kind of love experienced by Ariana, according David DeSteno, the author of Emotional Success: The Power of Gratitude, Compassion and Pride, is a potent driver for achieving long-term goals.

His research shows that self-discipline — the kind where you force yourself to buckle down to complete tasks — is not effective in achieving long-term goals. Discipline over time, he writes, is a psychological and physical drain. However, when you are motivated by love, compassion and gratitude, as Ariana describes, self-control is not a depleting battle to be won. Motivated by love for the people you work with and the future you want to create acts as the most powerful engine for doing the hard work.

Ariana is clearly driven by a love that is shared. “The people gathering for Hinenu share a love for the future we are creating,” she says. “We are building it from faith in the vision and faith in each other.”

My cynical side emerges. I ask Ariana about the things that challenge love, “like those late-night meetings, when people get on each other’s nerves? The grumpies?”

Without pausing, she says, “It is like with your partner: You may not like what they did the day before, but you still love them today. You can be in love with someone and be frustrated, too.”

Without grit, you can’t meet the challenges of launching anew. “Lack of grit is the entrepreneurship killer,” writes Amy Rosen in “Why ‘Grit’ May Be Everything for Success.” You have to have the “stick-to-it-ness … the tenacity to not throw in the towel.”

“There’s a million reasons why it’s a bad idea to start something new,” cautions Ariana, and “there a million chances to fail.”

With grit stemming from love, you can face things like not getting the grant for which you spent hours applying. You can keep your eyes open when the clock strikes midnight and you have another 125 miles to drive.

I’ve learned from Ariana that true entrepreneurial grit doesn’t come from a teeth-clenching self-imposed discipline. It comes from opening your heart to loving the people you serve and the future you are called to create.

“Fall in love,” says Ariana, and “keep falling in love.”

Reconstructing Judaism explores and funds innovative ideas for connecting with and serving unengaged and under-engaged populations — in new ways and spaces. Congregation Bet Haverim created “Your Jewish Bridge” in Atlanta, and its founder shares lessons learned after the first year and a half of the project.