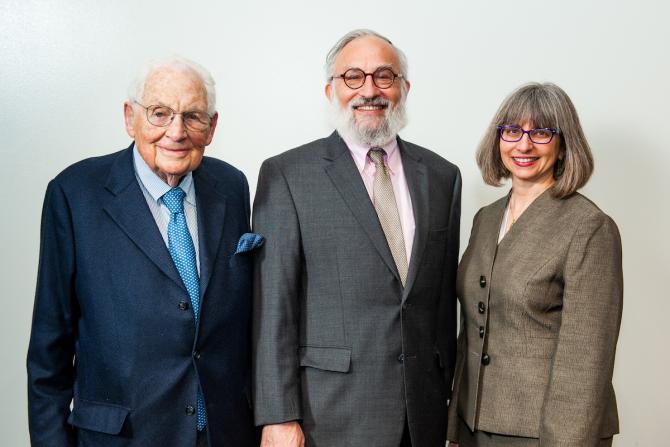 The challenge of achieving gender equity in organizational leadership. The effort to make ethical Jewish decisions in a post-halakhic framework. The need to reconstruct Jewish liturgy for contemporary times and include a chorus of voices and the quest to bring peace and justice to Israelis and Palestinians: These issues have been, and continue to be, among the Jewish community’s central concerns.

They are areas to which Rabbi David Teutsch, Ph.D., has devoted much attention throughout his rabbinic, administrative and scholarly career, and where he has exerted great impact. They also were the themes explored by rabbis, scholars, communal leaders and other participants at “Jewish Values & The Ethical Now: A Conference in Celebration of Rabbi David A. Teutsch, Ph.D.,” held March 10-11 at Philadelphia’s National Museum of American Jewish History.

“There is no way to adequately honor and do justice to the merits of David’s work. David’s work in ethics, liturgy and communal organization has been groundbreaking not only in Reconstructionist circles, but throughout the non-Orthodox world,” said Louis E. Newman, Ph.D., a Stanford University dean and noted Jewish ethicist who spoke at the conference, which was attended by more than 160 people.

While more than a few speakers took time to focus on Teutsch’s accomplishments, the conference’s primary focus, according to Rabbi Mira Wasserman, Ph.D., who succeeded Teutsch as director of the Center for Jewish Ethics last year, was to break new ground and test new models of ethical discussion.

The conference highlighted voices from across the Jewish world, yet the proceedings embodied the Reconstructionist approach to conversation. Presenters and attendees examined issues from many sides, exchanging perspectives with deep respect for one another and Jewish tradition. One attendee referred to the panel “Ethical Responses to the Israeli-Palestinian Conflict” as the most useful conversation on Israel in which he’d ever participated. 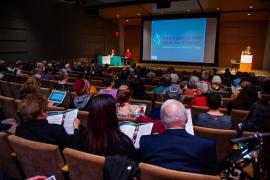 Wasserman explained that the focus on the “now”, as captured by the title, was in keeping with the Reconstructionist focus on the present and on Judaism as an “evolving religious civilization.” The papers that come out of the conference will be published in the Journal of Jewish Ethics.

“First, I want to express my gratitude to Reconstructing Judaism for being the first to do almost everything – because the Reform Movement does it next, and then the Conservative Movement, and then Modern Orthodoxy … we’re right behind you!” said Rabbi Asher Lopatin, a conference speaker, a leader in modern Orthodoxy.

Among those in attendance were Daniel Levin and his wife, Ambassador Fay Hartog-Levin. Levin and his sister, Mimi Lieber, are longtime supporters of the Center for Jewish Ethics. (Lieber was unable to attend, but her son Janno Lieber represented her family.) The college’s Levin-Lieber Program in Jewish Ethics is named for their two families.)

In an interview, Levin, founder and chairman of the Chicago-based Habitat Company, said he traveled to Philadelphia for the conference to honor Teutsch, whom he has known for more than 30 years and considers a longtime friend.

“I have the utmost respect for David as a leader of the movement,” Levin said. “I have told him that with his depth of skills and energy I believe he could lead almost anything, and we are all fortunate that his passion has been for the Reconstructionist Movement.”

Levin noted that he’s supported the Ethics Center since Teutsch stepped down from the RRC presidency in 2002 and asked Levin to back his next project: building up the Center for Jewish Ethics. “Ethics are so much a part of any religious activity,” explained Levin, a member of Jewish Reconstructionist Congregation in Evanston, Ill. “A rigorous focus on ethics epitomizes the values that our movement stands for. So many of the decisions we make in life are based on sensitivity to practical applications of ethical considerations.”

The opening seminar, “Leadership, Power and Gender,” examined the qualities and practice of ethical Jewish leadership with a focus on the power dynamics and inequalities of the past. It reflected Teutsch’s commitment to strategic and effective leadership guided by Jewish values. A trusted advisor and mentor to countless rabbis and organizational leaders, Teutsch, who has a doctorate in social systems from the University of Pennsylvania’s Wharton School, has had an outsized impact on the Jewish nonprofit space.

“Gender bias is intense in the Jewish community,” said Ruth W. Messinger, global ambassador for the American Jewish World Service and former Manhattan borough president. “We have to be thinking hard about how to change a climate of gender bias. And we have to ask: What stops us from exercising moral courage when the moment calls for it? The fear of unpleasant consequences? People don’t want to stick their necks out. There can be a cost to acting on one’s principles, but there is a bigger cost to abandoning them.” 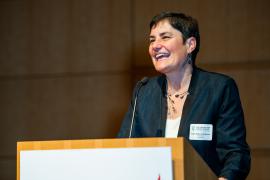 In separate presentations, Rabbi Deborah Waxman, Ph.D., president of Reconstructing Judaism, and Rabbi Georgette Kennebrae, spiritual leader of West End Synagogue in New York City, spoke about how their identities as women, lesbians and, in Kennebrae’s case, a person of color, impact their experiences as Jewish leaders. And the calibrations they sometimes feel compelled to make bring up a host of ethical questions.

As a Zionist committed to justice for the Palestinian people, Teutsch has worked in pursuit of a two-state solution as co-chair of J Street’s Rabbinic and Cantorial Cabinet. He’s also used his position and writings to advocate for civil, respectful dialogue at a time of increasing incivility, within the Jewish community and broader political culture. Honoring this legacy was always going to pose its own challenges.

According to participants, organizers and observers, the “Ethical Reponses to the Israeli-Palestinian Conflict” panel was truly a rare occurrence. Conservative, Orthodox, Reconstructionist and Reform rabbis shared the stage to explore the most divisive topic in Jewish communities today. They did so in a deeply respectful way that drew on Jewish values, rather than political talking points. Several of the participants seemed to wrestle with their own positions regarding the future of Israel, publicly displaying their own uncertainties and vulnerabilities. Wasserman explained that the tone of the conversation reflected the thoughtfulness of the presenters and resulted from hours of pre-conversations.

“I approach the topic with a heavy heart. I feel pain and sadness. I have sat at a lot of shabbos tables recently which had the feeling and tone of a house of mourning, and some of that is in my heart now as I try to articulate and encapsulate a Jewish ethical response,” said Rabbi Amy Eilberg, the first woman ordained by the Conservative movement and a member of J Street’s Rabbinic and Cantorial Cabinet.

Eilberg said that in speaking about Israel/Palestine in terms of Jewish ethics, she balances the considerations of defending Jewish lives and protecting the land of Israel with Jewish tradition’s consistent focus on protecting marginalized peoples. She is not optimistic about the prospects for a two-state solution and worries about Israel’s rightward political drift. Yet she feels restored when she thinks about ordinary Israelis and Palestinians working for peace.

“The thoughts of those people doing that remarkable peace-building nourishes my heart and keeps me going,”” said Eilberg. Speaking about the Israel conversation, Wasserman said that “we had a taste of what can happen with trust and courage.” 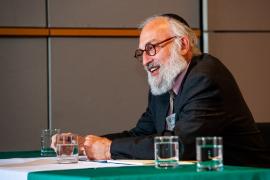 Teutsch concluded the conference with an observation: “Leadership doesn’t just come from the person at the podium. Moral leadership can come from anywhere in the room.”  He recalled that in the 1955-56 Montgomery Bus Boycott, an “army of people” worked behind the scenes to support Rosa Parks and Martin Luther King Jr. “I hope, today, we have the courage to serve in the same kind of army.”

Regarding next steps for the Center for Jewish Ethics, and its focus on gender, power, and “The Torah of #Metoo,” Wasserman said that, “while the mission doesn’t change, what changes is the context of the world in which we are trying to do this work.”

Did you like this feature and want to see more? Support the organization that makes it possible, Reconstructing Judaism.