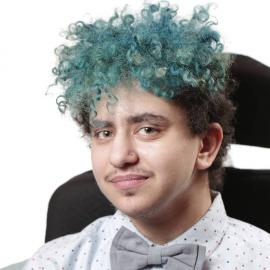 Update: Emet Tauber passed away on Monday, March 25, 2019. May his memory be a blessing.

More than anything, Emet Tauber wanted to be a rabbi. The 24-year-old hoped to share his love of Judaism with the world, to use his position and knowledge to teach and inspire others. As a disabled, transgender man, he sought to shatter stereotypes and encourage people to see the image of God in all individuals. Due to complications associated with a rare genetic disorder that are proving fatal, he was unable to complete the program at the Reconstructionist Rabbinical College.

Yet, in the way he has lived his short life, and in the manner he is choosing to face death, Tauber — who opted to forgo treatment and enter a hospice facility late last year — has succeeded in teaching and inspiring more people than maybe even he could imagine. And by creating a scholarship for future students, he has ensured that others will be able to pursue their own dreams of serving the Jewish people.

“Being a rabbi has been his dream for a very long time. He loved being at RRC, he loved it even though it was incredibly challenging. There were some days he would barely get there,” said Rabbi Linda Holtzman, Tauber’s academic advisor. “He taught people what it means to love Judaism, to incorporate it into your life, to live proudly as somebody who is queer, and to face disability with courage.”

Tauber was born with Ehlers-Danlos syndrome, a rare genetic connective tissue disorder. EDS is often associated with a myriad of complications. Tauber has contracted several, including gastroparesis, a condition in which the stomach cannot empty itself of food in a normal manner.

He also has Chronic Inflammatory Demyelinating Polyneuropathy (CIDP), an autoimmune disorder of the peripheral nervous system. In Tauber’s case, this caused a weakness in his legs requiring the use of a wheelchair. He first began to use a wheelchair while a student at SUNY Purchase, from which he graduated in 2016 with a liberal arts degree. His health further deteriorated over the course of his two years at RRC and he was frequently hospitalized and missed class. Ultimately, as he explained in a November Facebook post, his “entire digestive system shut down.”

His father, Stuart Sanders, explained that “the progression of this disease has really taken hold. He had to suspend his attendance a couple of times because of his illness. He just couldn’t make it to class.”

In a Facebook post in late November, Tauber announced that he had made a difficult and painful decision to forgo further medical treatment. “I have been hospitalized with a blood stream infection 4 times in the last five months. During my most recent hospitalization, I decided with the help of my family and close friends that my body could not go on like this. I have chosen to stop treatment for these infections and go on hospice. My body simply cannot continue like this, nor do I really have any quality of life. I am not living I am simply existing. I want to make the most of the time I have left by spending it with all of you.”

Preparing for the end, Tauber considered his legacy: what causes did he want to support and what kind of world would he want to help bring about? He decided to steer a substantial amount of his remaining resources to Reconstructing Judaism. He and his family made a gift of nearly $70,000 to the institution to create a new need-based scholarship fund for rabbinical students. The Tauber scholarship will make a meaningful impact in the life of the recipient. Tauber also requested that each scholarship recipient deepen their knowledge of the community of people with disabilities through study or volunteer work.

“Scholarship aid has a tremendous positive impact on the lives of our rabbinical students,” said Rabbi Amber Powers, Reconstructing Judaism’s executive vice president. “Emet has dedicated his life to helping others and this legacy will continue to be honored for years to come through this new scholarship.”

During a recent interview, Tauber, along with his service dog, Roxie, received a steady stream of friends and family. In the hospice room decorated with a giant rainbow flag, one could almost forget the IVs and imagine oneself in a dormitory, rather than in a place where life inevitably must end. His classmates and teachers have been among his most frequent visitors, even organizing a “living funeral” attended by more than 50 people. (As of this writing, Tauber’s condition had worsened and he was no longer receiving fluids or nutrition.)

“RRC is a unique learning institution for future Jewish leaders, because not only does it provide the education which those students take forward, but it also provides professional development and values,” said Tauber.

“RRC is such a supportive community,” continued Tauber. “Every single time I was in the hospital or got sick, students would all come visit me in the hospital or write really lovely emails, [and] helped me do something that I needed to do like take care of Roxie. I want RRC to be there in the future for other people.”

At no point has Tauber’s life been easy. He lost his birth mother at the age of 9. At that time, he moved from California to New York City to live with family friends Stuart Sanders and Naomi Goldman, whom he considers his parents. Scholarships are particularly meaningful for Tauber because he frequently relied on financial assistance to attend Jewish institutions like the Solomon Schechter School of Manhattan and The Heschel School, a Jewish middle and high school on Manhattan’s Upper West Side.

“I got a scholarship and a lot of the students I know received a scholarship,” said Tauber, who served on RRC’s Kehillah Committee, taking an active role in the college community. “Going to rabbinical school is not inexpensive. Most people who want to become a rabbi are not people who have grown up with a lot of money. They need financial help in order to achieve their goals, I have been someone who has received scholarships from organizations all my life. I have never been turned away for inability to pay and I don’t want any students turned away for an inability to pay. It just should never happen.”

Holtzman said that “the fact he is giving this gift just shows what was important in his life. He has been able to think through clearly how to help others fulfill these dreams. He is really a caring and generous soul.”

Tauber had been a committed activist on issues ranging from disability rights to LGBTQ issues and the Israeli-Palestinian conflict. He had served as a board member of the National Council on Independent Living and been active in Glsen which, according to its website, was founded to “improve an education system that too frequently allows its lesbian, gay, bisexual, transgender, queer and questioning (LGBTQ) students to be bullied, discriminated against, or fall through the cracks.”

In addition to Reconstructing Judaism, he made gifts to those organizations and staged an “end-of-life-fundraiser” for IfNotNow, the movement that, according to its website, seeks to “end American Jewish support for the occupation.”

He’s also been an active member of Kol Tzedek, the Reconstructionist congregation in West Philadelphia.

RRC student Sarah Barasch has gotten to know Tauber over the last two years. She said that, despite all his health challenges, he managed to travel to advocate on causes he cared deeply about, once Skyping into a rabbinic Hebrew class from an airplane on his way back from testifying before a state legislature about disability issues.

“He taught me a lot about what it means to work really hard and try to get as much as you can out of the time you have,” said Barasch. “He has set a really powerful example for dedication and commitment. Maybe he pushed me to envision what the rabbinate could be.”

While Barasch offered that it might sound clichéd, she couldn’t help but think that “if he could do as much with his short life as he did, I feel more inspired to do more with mine. Because of knowing Emet, the world has a lot more possibilities than I saw before.”

Anyone seeking to donate to the fund in Emet’s honor can make a gift online or contact Reconstructing Judaism staff member Rachael Burgess (rburgess@reconstructingjudaism.org or 215.576.0800 ext. 141.) Update: The name of the scholarship fund is the Emet Faye Tauber, z”l, Memorial Scholarship Fund.