Fighting Fires All Part of a Life of Service 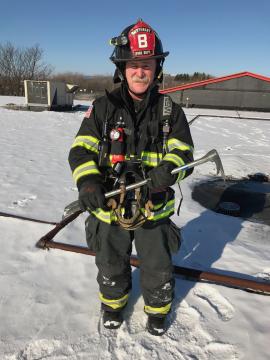 Rabbi Howard Cohen has, for 18 years, served as chaplain of the Bennington Village Fire Department and an officer of the Eagle Hose Company. He’s the sole Jewish volunteer firefighter in Bennington, Vermont, and likely one of the few rabbis in North America making a habit of charging into burning buildings.

Cohen, 59, explained that firefighting embodies the spirit of pikuakh nefesh, the Talmudic precept that saving a life is the most important religious obligation. Firefighting also dovetails with his commitment to being a part of his community, utilizing Jewish wisdom to impact the lives of Jews and non-Jews alike.

“Formally, Judaism doesn’t play much of a role in what I do with the fire department, but it informs everything I do,” said Cohen, who, except for a short stint in North Carolina has lived in Vermont since graduating from the Reconstructionist Rabbinical College in 1994.

“My fellow firefighters are not churched guys,” he continued. “They are not looking for a Bible study. For the most part, I’m just one of the guys, and yet they also know that I’m there for them if they want to talk. Maybe it’s my imagination, but I like to think my rabbinic training, in some small way, adds a bit more gravitas to my contributions.”

Cohen’s rabbinic career epitomizes the Reconstructionist Rabbinical College’s focus on preparing religious leaders to serve in diverse settings. In fact, Cohen embraced the idea that rabbis should be entrepreneurs and innovators before RRC officially introduced entrepreneurism into its curriculum.

“When you look at the rabbinic landscape, there are fewer full-time rabbinic jobs. Rabbis today need to look toward diverse venues for parnasa [earning a living],” he said. “Part of my role-modeling for younger rabbis is to say, ‘Look at all the ways that you can have a satisfying career.’ ”

Before attending rabbinical school, the St. Louis native spent a decade as an instructor for Outward Bound, working primarily with troubled youth. Since 1990, he’s kept up his love of bringing people into the wilderness through Burning Bush Adventures, a for-profit venture that provides “close encounters with God and Judaism through quality wilderness experiences,” he explained. He’s also a life coach.

From 1994 to 2006, he served as religious leader of Congregation Beth El, a Reconstructionist congregation in Bennington. When he retired, he continued to lead Burning Bush adventures, later becoming a part-time rabbi at Shiryat Hayam, a Reconstructionist congregation on Boston’s South Shore. He also works as a substitute teacher in his town’s public high school, an immensely rewarding experience that he said put him in contact with a far wider range of young people than he’d impacted as a congregational rabbi.

“I know half the kids in the school,” he said. “It’s fun to connect with them.”

Along with his wife, Gail, he has three adult children: Ilana, an anthropologist and farmer; Moriah, who is pursuing a master’s in social work; and Caleb, an outdoor adventurer and tree planter.

“I actually found that congregational life afforded me time to spend with my children when they were young, especially on Shabbat,” he said.  “I also found leading a small congregation was not terribly demanding or time consuming. For example, I was not called upon to do a lot of life cycle rituals or pastoral visits. The multifaceted aspect of my professional life today reflects how I built upon and integrated many of my interests.”

His work as a volunteer firefighter remains close to his heart. He’s also a stickler for fire safety, wasting few opportunities to remind people of the need to check that their smoke detectors are in working order.

Cohen recalled being approached about becoming a Bennington fire-department chaplain in the months following the Sept. 11, 2001 attacks. He agreed to become the department chaplain providing that he could train as a regular member. (He noted that the training to become a volunteer firefighter is rigorous and no different from what is required to be a paid firefighter.)

“Fighting fires is just part of what we do,” he said. “We respond to lots of car accidents. We respond when tree limbs are down, when there’s flooding waters, and, yes, even to cats stuck in trees. We assist the ambulance crew with medical lifts.”

One upshot of his involvement in working with other firefighters is the opportunity to interact with people from a wide range of educational, economic, religious and political backgrounds.

“We rabbis sometimes live in bubbles. Working with Jewish communities can be very isolating,” he acknowledged. “It is very different sector of society that your average firefighter comes from. Many of my firefighter colleagues are blue-collar guys, even a little rough around the edges. They may not have college degrees, but I’ve been impressed by their insights and amazing technical skills.

“One aspect of my work with the fire service that I really treasure is how it involves working with people from such a wide range of different backgrounds,” he added.  “The fact that conservative Trump voters and a progressive rabbi like me can trust our lives to one another fills me with hope for the future.”

How does he think of his firefighting experience in terms of his rabbinic career?

“I went into the rabbinate not to be any particular type of rabbi. I went into it with the vision of being a rabbi on the geographical, political fringe,” he said. “For me, my rabbinate, my life, is about being in service to others. Living in southwestern Vermont, serving a small congregation outside of a larger Jewish population and being in the fire service have all combined to provide me with a very fulfilling rabbinic career.”