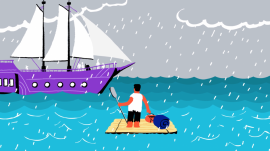 “These are the times that try men’s souls.” While Thomas Paine’s famous first sentence of his Common Sense pamphlets supporting the American Revolution could use some serious updating in terms of gender inclusivity, his sentiment, unfortunately, feels quite contemporary.

The Reconstructionist Rabbinical College recently held its graduation ceremony for the class of 5777, celebrating a dynamic, talented and passionate group of new rabbis. I reflected to the hundreds of people who gathered that, even as we celebrated, we were also coming to terms with the conclusion of a most challenging academic year. The RRC community and most people associated with the Reconstructionist movement began the year believing that America and the Western world were traveling on a trajectory that was bending toward justice. These beliefs — and we ourselves — have been destabilized.

Political developments, the rise in anti-Semitism and Islamophobia, the closing of America’s doors to refugees and the attempts to roll back the monumental gains made by the LGTBQ community all demonstrate that this trajectory has been rudely interrupted. Months after the most shocking presidential election in my lifetime, it feels to me that we are in the midst of a significant rewriting of the history of the post-World War II era.

We are still working out how to discern, how to react and, most importantly, how to act.

Several things are clear to me. Never has there been a greater need for progressive moral leadership and for communities that are at once intentional and welcoming. To face these times, Jews and the people who make their lives with us can draw on and must advance powerful, bedrock Jewish values: tzelem Elohim (we are all created in God’s image), ki gerim hayitem (remember that you were strangers), ahavah rabbah (there exists an expansive universal love we can draw upon), and tikkun olam (the world is broken and it is our task to repair it).

Across North America, people of faith have responded to the challenge of history by working to make the world — and their local communities — a better place. Christians, Muslims, Hindus, Buddhists and people of no faith stood alongside Jews in the wake of cemetery desecrations. So many of our progressive coreligionists have taken to the streets and airports in defense of refugees. At the local, state and national levels, progressive Jewish voices have responded to the challenge of our time with a clarifying vigor.

Recently, Rabbi David Wolpe, an articulate thinker about matters of faith and public life, published an op-ed in the Los Angeles Jewish Journal that argued that rabbis should keep politics off the bimah. “All we hear all day long is politics,” he wrote. “Can we not come to shul for something different, something deeper? I want to know what my rabbi thinks of Jacob and Rachel, not of Pence and Pelosi.”

I agree with Rabbi Wolpe’s premise that rabbis are trained to be experts in Jewish texts and traditions, not in political science. Yet I also believe the synagogue — bet knesset, or “house of gathering” in Hebrew — must not only be a house of worship and study but also must be an engine of justice and compassion.

Rabbis and religious leaders can and must talk about contemporary social and political issues in ways that speak out of and back to Jewish values.

We are often called the people of the book, but lately, our movement has embraced video as a means to encapsulate our message, to tell our story in a contemporary idiom. In our third annual video report, called “Let’s Journey Together,” we name, confront and illustrate the darkness of our age. In it, compassion, meaning, community and adaptation prevail. We surely don’t have as much control over the course of history as we do over a video script. Yet, by framing and articulating a way forward, we offer a vision for how to navigate the spiritual challenges of our times.

I invite you to journey with us through these challenging times and into the future.

Our congregations offer meaning, connection, conversation and, when needed, healing and support.

This past year reminds us all how much our voices matter, how much Reconstructionist Judaism and progressive religion more generally act for the good. We may never get to a point in history where our souls won’t be tried. Yet together, we can work to tilt the moral arc of the universe toward justice.

Won’t you join us on this journey?