All effective leaders move toward a compelling picture of the future — a vision. But entrepreneurs, unlike their counterparts mired in the status quo, can nimbly change direction when needed. Entrepreneurs are adept at the “two-step.” They move toward vision, and when facts on the ground shift, they deftly redirect before their organization becomes irrelevant.

Eric Ries, author of The Lean Startup, calls this entrepreneurial sashay “Pivot or Preserve.” Knowing when to make a change (pivot) and when to stay the course (preserve) is the dance of a successful entrepreneur. 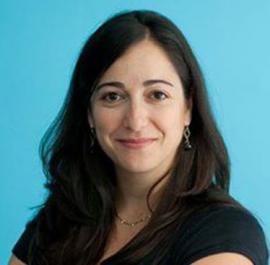 One entrepreneur in the Jewish community, who I’d like to dub a Ginger Rogers of the “Pivot or Preserve,” is Lisa Colton. As founder and President of Darim Online, she has dramatically changed the strategic direction of her organization numerous times while moving toward her vision. As a result, Darim Online has transformed from its early incarnation as a small project supporting synagogues in web development, to becoming the leading resource for Jewish community leaders who want to thrive in the digital age.

In 2000, when cell phones were used only for making calls, and websites were barely on the radar of synagogue leadership, Lisa saw Jewish organizations had little to no ability to engage people online. “Synagogues were shooting themselves in the foot. Especially,” she says, “when it came to my generation of young adults who were accustomed to seeing opportunities online. So I set out to solve a problem.”  Darim grew to be the community’s expert in helping Jewish organizations build great websites. And then the market shifted. Congregations saw the necessity of websites, and they began to turn to professional web firms.

Lisa pivoted. “As soon as customers jumped to the free market, I sold my part of the organization for a profit.” And she preserved.  “I reinvested the proceeds into the next phase of our mission.” Lisa saw a new gap in the Jewish community’s ability to engage online. Jewish organizations had minimal capacity to engage with social media. So Darim Online launched Social Media Boot Camp. The Boot Camp was groundbreaking. And then it wasn’t. Within a few years, the Jewish community’s needs changed again. Facebook, Instagram, and Twitter became de rigueur. Again, Lisa had to pivot.

To master the pivot and preserve, Lisa has always paid close attention to the needs of the people she tries to serve. Gathering data about participant needs has always informed how she directs her organization.  By being finely attuned to changing trends, Lisa is able to make strategic pivots before her organization becomes obsolete. As Eric Ries writes, Lisa does not get “stuck in the land of the living dead, neither growing enough nor dying, consuming resources and commitment from employees and other stakeholders, but not moving ahead.”

Darim Online still offers Social Media Boot Camp, but it is no longer their primary value added. “Now, there are thousands of people who do social media in the market. We do some of it, but it has been normalized. I no longer have to be a social media activist,” remarks Lisa. “So we redirected again.” Today, Darim Online provides training, coaching and consulting services to advance the Jewish community’s models of organizing, community building and leadership that better reflect changes in our culture driven by social media and the millennial generation. 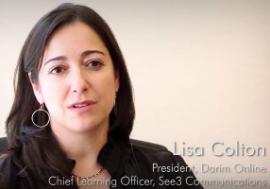 In 2013, Darim Online formed a strategic partnership with See3 Communications, a for-profit B-Corp, to expand capacity and bring more resources and expertise to the Jewish community.

Lisa laments that there are too many leaders in the Jewish community who have not responded to the changes in how Jews make meaning. “One of my pet peeves,” she says, “is leaders who don’t understand the importance of being nimble or don’t know how to do it.” Shifts in the last decade in how Jews make connections have been as dramatic as shifts in technology. “Things are changing so fast,” comments Lisa, “we have to know how to morph from a yellow cab model to Uber. People still need transportation, but how do we do it so it is more aligned with people’s needs and behavior? The mission may stay the same, but we have to adapt strategically and programmatically.” Lisa is continually listening for the needs and then adapting accordingly. “I call myself an entrepreneur,” she says, “because I see opportunities and feel compelled to seize them.”

“For decades,” Lisa says, “the Jewish community invested in institutions because you could count on membership. That’s not the case today. Millennials are institutionally averse. They are empowered to create experiences for themselves. They are more diverse, and embrace their multiple identities.”

Clearly, comments Lisa, the existing landscape doesn’t meet people’s needs. “Now my work at Darim is to help leaders of Jewish organizations see how things are changing, and be able to respond quickly enough to make a difference.” She cautions,  “Being nimble doesn’t mean you have to run after every leaf that blows, but this is a time when adaptation is required to be most impactful.”

Darim Online’s success is proof that Lisa has mastered the entrepreneurial two-step. Mastery requires more than agility.  Ginger Rogers once said, “Part of the joy of dancing is conversation.” To know when to pivot or preserve, you have to listen carefully to your partners. The more you are in conversation, the more you’ll know which direction to step.

Watch Lisa Colton’s Eli talk: Standing at the Precipice of a Revolution.