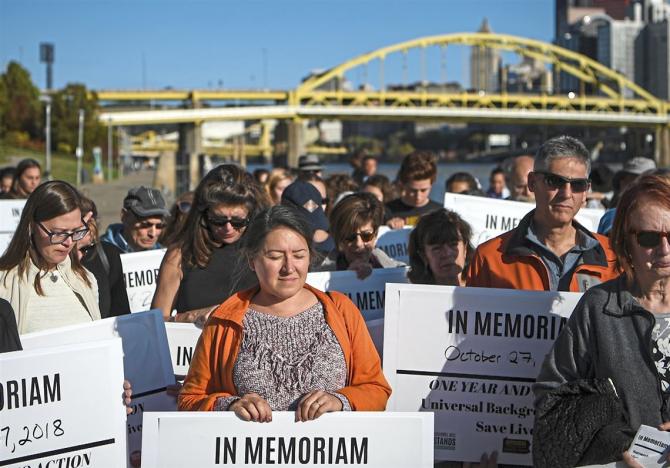 This piece was originally published on October 27, 2020 in the Pittsburgh Post-Gazette as Mourning, recovering and rebuilding: Two years after the Tree of Life shooting, a community’s response to hate

For models of how to enact resilience, we look to the members of Dor Hadash, the vibrant lay-led Reconstructionist congregation in Pittsburgh that was meeting in the Tree of Life synagogue building on Shabbat morning of Oct. 27, 2018. As the lay and professional leaders of the national Reconstructionist movement, we have been privileged to witness their extraordinary efforts to mourn, recover and rebuild their community in the aftermath of the unimaginable. Even as we have endeavored to support and amplify those efforts over the past two years, we have learned from their example and asked ourselves how we would react if, heaven forbid, we were forced to stand in their shoes. The members of Dor Hadash never asked to be our role models. We have no doubt that they would have given anything not to be. Nonetheless, we have learned from them and continue to do so.

Much of that terrible day was filled with special dread. By early afternoon, we learned that the perpetrator had made particular note of Dor Hadash’s participation in HIAS’ National Refugee Shabbat in a social media post. We spent several agonizing hours wondering whether his hatred was targeted or broad: Was he acting alone? Were more Jews who had signed onto HIAS’ efforts to “welcome the stranger,” which we understand as a central Jewish tenet, going to be targeted? Was his hatred more generalized? By the next morning, it was clear that Dor Hadash had suffered grievous losses, including the devastating death of Dr. Jerry Rabinowitz, the grave wounding of Dan Leger and the traumatization of members of the community. It also became clear that the killer’s hatred was blind to denominational distinctions and political commitments. He was out to kill Jews. He was motivated by an insidious white supremacist agenda that demonizes the “other” and conflates all Jews, all non-white immigrants, all Muslims, all people of color — with deadly consequences.

Though the shooter caused mayhem, grief and lasting trauma to all three congregational communities and beyond, he did not succeed in quashing the life-affirming commitments of the members of Dor Hadash. They have stayed true to their values and their political commitments at every step. Immediately after the shooting, members gathered to mourn and pray and find ways to support each other, and they opened themselves to support from around the world and from across the Reconstructionist movement.

In the months following the massacre, members of the Dor Hadash Social Action Committee established Squirrel Hill Stands Against Gun Violence to join with Jews and non-Jews, residents of Pittsburgh and Americans from around the country to advocate for sensible legislation that can reduce gun violence. As Dan Leger has regained his strength, he has made lobbying for effective gun legislation a major focus of his time. Honoring the memory of Dr. Jerry Rabinowitz, a profound healer who staunchly opposed the death penalty, in August 2019 the congregation wrote to U.S. Attorney General William Barr urging a plea bargain that would result in a sentence of life without parole for the perpetrator. And the Dor Hadash community has reaffirmed its focus on recognizing the humanity in all people through ongoing tikkun olam (social justice) efforts toward welcoming and compassionate immigration policies.

And, over these past two years, Dor Hadash members have celebrated the sabbath each week and the holidays in their annual cycle, shared simkhas (happy occasions), supported one another in sickness and mourning, and educated their children. They have gathered — in person and, this year, virtually — to learn together and pray and socialize. They have visited the sick and fed the hungry and gone to protests. Most recently, they successfully celebrated high holidays over Zoom. Dor Hadash was not frozen in amber on Oct. 27, 2018. That day will forever be part of the story, but its members are adamant that the depraved actions of the shooter will not define their community. They are full of substance and conviction, which fosters resilience.

We are living at a moment when the white supremacism that fueled the Tree of Life perpetrator is surging, and its adherents are “standing by,” with the tacit and sometimes overt encouragement of those in positions of authority. Anti-Semitism and systemic racism are both branches of the same poisonous tree. Every day each of us is faced with choices about how to respond to this fearsome present and how to create a different future — one that is just, safe and nurturing for all people.

On Dor Hadash’s website appears a quote by Rabbi Mordecai Kaplan, the founder of Reconstructionism: “God is the sum of the animating, organizing forces and relationships which are forever making a cosmos out of chaos.” As we face potential chaos and the ever-present forces of hate, we seek to emulate the example of the members of Dor Hadash, who encountered the very worst and still strive to strengthen their community and build a better world based on hesed (lovingkindness) and tzedek (justice). May we all find this strength and may our efforts be multiplied exponentially.