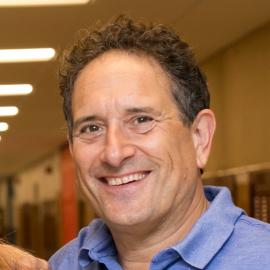 Did U.S. Rep. Andy Levin (D-Mich.), elected to his first term in the House of Representatives on Nov. 6, 2018, really plan to attend the Reconstructionist movement-wide convention in Philadelphia just two weeks after the vote? After all, by the time convention rolled around mid-month, he would be wrapping up his congressional orientation in Washington, D.C. And his youngest child, Molly, would be a week away from celebrating her bat mitzvah at Congregation T’chiyah in Oak Park, Mich.

Yet, as Levin tells it, with everything that was going on in his life, missing convention was simply never an option. Reconstructionist Judaism is too big a part of him, and he’s too connected to the Reconstructionist community to have passed on the event.

“I couldn’t do anything else. I just wanted to be here. In terms of who I am as a spiritual person, this is a kind of nourishment that I need to have, this community,” said Levin, the former president of T’chiyah, during a November interview at convention, where he was one of 750 attendees. “The fundamental thing to be said is that I love so many people here.”

Levin has long been active in T’chiyah. He had served as the congregation’s president before stepping down in order to run for Congress, successfully winning a Democratic primary in August and a general election in November. (Reconstructing Judaism does not take positions on candidates or elections.)  Following a diverse career as a lawyer, labor leader and state government official, he won the seat previously held by his father, longtime representative Sanford Levin. He is also the nephew of former U.S. Sen. Carl Levin, who was amoung the founders of Congregation T’chiyah. 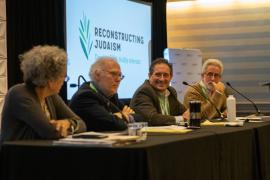 Levin appeared on a convention panel called “The Implications of the U.S. Midterm Elections: What Happens Next” alongside Ruth Messinger, former New York City politician and head of American Jewish World Service, and Seth Kreimer, constitutional-law expert at the University of Pennsylvania’s Law School. Following the panel, he sat for a wide-ranging interview, discussing the role that T’chiyah and Reconstructionist Judaism has played in life. He also addressed the daunting challenges of finding consensus and passing meaningful legislation during a time of extreme partisanship and division.

And, as the nation prepares to mark what would have been Dr. Martin Luther King Jr.’s 89th birthday, Levin reflected on how, as an organizer and leader, he has been shaped by King’s example. He referenced King when asked about whether civil discourse is still possible in the nation’s capital.

“Think about how Martin Luther King Jr. conducted himself,” said Levin. “He wasn’t ever verbally aggressive. He was always respectful. But he spoke truth to power, and he made things very, very uncomfortable for people in power. … I’m a union organizer, I’m a human-rights activist and an environmental activist. I’ve been arrested multiple times for civil disobedience, and environmental and worker’s right’s issues. And I’m as much a follower of Gandhi and King as I am of FDR. And so I don’t go to Washington wanting to make nice in the sense of not raise fundamental issues, not speak inconvenient truths.”

Levin was raised in a Reform community in suburban Detroit, and was exposed to Reconstructionist Judaism through family who lived in New York and belonged to SAJ, the first Reconstructionist congregation. While a student at Williams College in Massachusetts, he spent a year in India studying Tibetan language and culture, and later earned a master’s degree in Asian languages and Buddhist philosophy.

“What I really have taken from Buddhism is an idea of what spiritual realization is — namely, building an awareness, a self-awareness of how little and inconsequential we are,” he said.

After graduating from Harvard Law School, he and his wife, Mary Freeman, moved to Washington, D.C., and began attending Adat Shalom in Bethesda, Md. Levin recalled that the couple felt immediately embraced even though Freeman does not identify as Jewish.

“The whole notion that the tradition gets a vote but not a veto, and that each generation has to reconstruct Judaism to fit its time, its place, its issues, I really believe in that, and it’s been an honor to be a part of that,” he said. “My Judaism is very much about community and about our relationship to the earth, our relationship with people around us and taking care of each other.”

He noted that the movement’s previous convention, held in California in 2010, was pivotal for him and T’chiyah. It was there that—thinking about how to grow their congregation and make social justice central to its communal life — he and others laid the groundwork for what would become Detroit Jews for Justice. T’chiyah founded it as a separate organization to, according to its website, “live out their mission of making social change central to their life of their congregation and committed to being a social justice organization owned by the entire community of Metro Detroit.” The organization has concentrated on water, environmental justice, fair housing and other municipal issues.

Levin said the creation of Detroit Jews for Justice has raised the profile of T’chiyah, engaging Jews in Jewish life who otherwise had been unaffiliated, and made a meaningful contribution to social-justice advocacy in the Detroit Metro area.

Though he’ll no longer be in leadership or be able to attend services every Shabbat, he still plans to be a presence in the community. That’s in part because he believes that he’ll need the spiritual sustenance and communal support to sustain him while serving in Congress.

“I will be an active member of my congregation, and I will attend services,” he declared.

How would he define his Jewishness and Judaism?

“I’m not a tribal Jew,” replied Levin. “I am not circling the wagons with my family, with my district, with my people and with my faith tradition. My Judaism is about justice for everyone. That’s what I feel like I was taught by my parents and my family, and that’s what I have to do.”