The Jewish Women’s Archive (JWA) this month expanded its online exhibit “Women Rabbis,” which highlights nearly a dozen Reconstructionist clergy as well as the history of the movement. 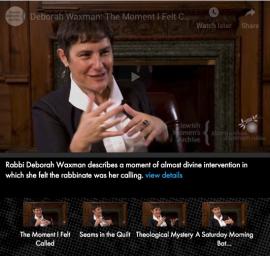 Video interviews such as these allow women rabbis to tell their own stories.

When the exhibit debuted in 2016, it featured profiles, including curated video interviews, with 26 rabbis. With its latest expansion, the exhibit highlights more than 75 women rabbis from around the world, including 11 who are either graduates of the Reconstructionist Rabbinical College or directly connected to the movement.

The gallery of rabbinic profiles can be navigated thematically and alphabetically. The video interviews delve into a range of subjects, including prayer and spirituality, paths to the rabbinate, pluralism in Israel, work/life balance, leadership and changemaking. 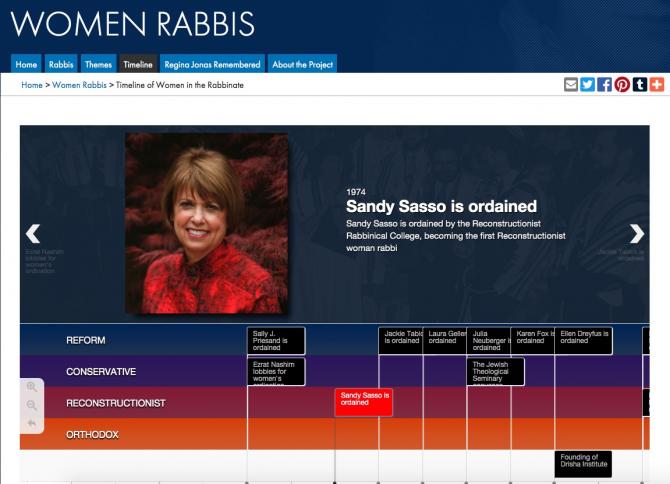 Jewish Women’s Archive. “Timeline of Women in the Rabbinate.”

The exhibit also features a detailed, interactive timeline of the history of women in the rabbinate, showing developments within the Conservative, Orthodox Reconstructionist and Reform movements.

“This collection on jwa.org tells the extraordinary story of how women have transformed the rabbinate and Jewish life in the mere half century since they began being ordained from rabbinical schools,” according to JWA’s news release.

The online exhibit is the result of a partnership between JWA, the world’s largest source of information on Jewish women, and SAWR, a Los Angeles-based organization operating under Jewish Women’s Theater, the release stated.

Dr. Judith Rosenbaum, JWA’s CEO, said that “we are delighted to expand this important collection with new powerful role models and stories. As we near the 50th anniversary of the ordination of women rabbis in America, it is more important than ever to understand and celebrate the experiences and impact of women’s rabbinic leadership around the globe. The diverse voices in this collection illuminate both how much women rabbis have shaped and renewed 21st century Judaism and Jewish communities, and the challenges we continue to face.”