The following story originally appeared on April 20, 2022, in the Jewish Exponent. Sign up here for the Philadelphia publication’s weekly emails.

Or Zarua, a suburban-Philadelphia community serving baby boomers, was started with funding from Reconstructing Judaism’s Auerbach Entrepreneurial Grant Program. For more about the community and the grant program, check out this video, “The Story of Or Zarua.” 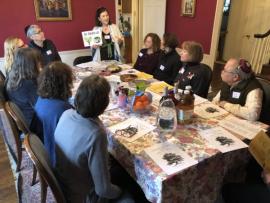 Or Zarua congregants gather in a member’s home pre-pandemic. (Photo by Elliot Barnathan)

For baby boomers whose kids are older now, synagogue is less of a necessity. They do not need a preschool, a religious school and a path to a bar or bat mitzvah.

Instead, synagogue is now more of a choice, and it’s a choice that comes down to a simple question: How important is it for you to reinforce and deepen your Jewish values on a daily basis?

For the 80 or so families at Or Zarua, a Reconstructionist community on the Main Line, the answer is very.

Most of the members are both boomers and empty-nesters, according to Or Zarua Rabbi Shelly Barnathan. They are only a part of the community because they want to practice Judaism.

The synagogue doesn’t even have a building. Barnathan and the congregation hold services and events in people’s living rooms and at the Old Haverford Friends Meetinghouse, the home of a local Quaker community.

What brings Or Zarua members together is a shared set of values. The Main Line residents are committed to tikkun olam, or healing the world, and a progressive, adaptive approach to Judaism for the modern world. They also want to have a say in the synagogue’s operations, as many felt marginalized in their previous temples, which were more hierarchical.

But perhaps more than anything, the congregants believe in appreciating each other, they say.

Or Zarua means “light is sown.”

“We’re all coming from our own authentic place, where our light is,” Barnathan said. “What piece of the divine is true in us in an authentic way that we want to share?”

According to congregant Michael Grossman, Barnathan is often asking people the question, “What’s your superpower?” It sounds like an idealistic question designed to inspire, but really it’s more practical.

The rabbi, explained Grossman, is looking for people to lead synagogue programs. A congregant who was the poet laureate of Montgomery County conducts a poetry program once a month. Grossman himself loves cooking, so he coordinates Or Zarua’s community outreach efforts that involve food.

Barnathan does not even run her own synagogue’s Torah study class. She lets a congregant, who happens to be an expert on the subject, lead that. The rabbi is, however, one of his most passionate students.

“I just love that I get to be a participant,” Barnathan said.

The rabbi started playing that role five years ago when she went on more than 100 coffee dates with the people who would become her congregants.

Barnathan had just completed rabbinical school after leaving a 32-year career as a language arts teacher. She wanted to realize a childhood dream that wasn’t accessible to her in her Orthodox community. But she also wanted to connect more deeply with her Jewish spirituality, a desire she recognized in her boomer friends, too.

“I realized that people in our baby boomer, empty nester cohort had particular needs,” she said.

But their incumbent synagogues were not meeting them. 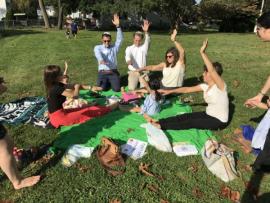 Or Zarua members get together for an outdoor event. (Photo by Elliot Barnathan)

Some felt marginalized even though they were paying the dues that kept the temple operating. Others were disillusioned at the unwillingness of Conservative leaders to embrace modern practices like intermarriage. All of them desired a place where they could practice Judaism according to their values.

Barnathan, a Reconstructionist rabbi, applied for and received a grant of $2,000 from Reconstructing Judaism, “the central organization of the Reconstructionist movement,” according to its website. Then she got another grant, this one worth $20,000, which stabilized the community in its early days.

Over the next five years, Or Zarua grew from about 45 families to 80. Even during the pandemic, when it went fully remote, it gained 10 new member families, Barnathan said.

Today, the synagogue uses a formal structure for paying annual dues. But besides that and Barnathan’s status as senior rabbi, nothing else about Or Zarua is that hierarchical.

The rabbi tries her best to poll the entire congregation on big decisions. She also makes a concerted effort to reach out to all members regularly. That way, when a synagogue issue arises in a specific area, she may just call someone likely to understand it.

“I put a lot of energy into reaching out to people,” she said.

About 20-30 people attend Or Zarua’s Shabbat services on Friday nights and Saturday mornings. More than 60 people typically come to bigger events. But all are still on Zoom due to COVID.

The next step, according to members, is to figure out how and when to return to in-person community life.

“It’s limited when we’re just on Zoom,” said congregant Sari Fogel, Ethan’s wife. “It’s much richer when we’re in the space together.”