Rabbi Elliott Tepperman: Bringing a Community-Organizing Model to the Pulpit

Having spent her career in journalism and Jewish communal service, working for organizations such as Hadassah and HIAS, Roberta Elliott was always deeply engaged with her Jewish identity and the wider world. Before 2006, as she tells it, direct social action hadn’t been a major focus of her life.

Then she joined Bnai Keshet, a Reconstructionist synagogue in Montclair, N.J., and soon all that would change.

After joining Bnai Keshet, she in time organized congregants to visit detained immigrants at a federal facility in Elizabeth, N.J., as part of her adult Bat Mitzvah at the age of 60. Later, she traveled to Vienna — where her father’s family was forced to flee the Nazis in 1938 — to assist Syrian refugees and other desperate migrants. She also went to Greece twice, volunteering at a refugee camp and aiding migrants in Athens. More recently, she’s been part of a local team that welcomed a Syrian family to her New Jersey town. 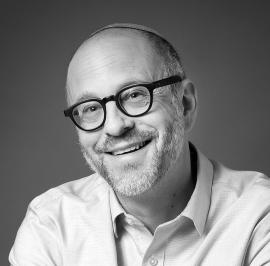 Elliott attributes her transformation to the inspiration and example set by Bnai Keshet’s rabbi, Elliott Tepperman.

“There is no question in my mind that my weekly interaction with Rabbi Elliott Tepperman has had a deep impact on my life and deep influence in seeking my own social justice activism. He was basically a wake-up call,” she said in a recent interview.

Three Bnai Keshet congregants, including Elliott, nominated Tepperman for the prestigious T’ruah 2019 Human Rights Hero Award, which he will be receiving at the organization’s May gala dinner in New York City.

“Each person he has influenced has become a drop in the wave of social action that defines Bnai Keshet,” she wrote in her nomination essay.

T’ruah: The Rabbinic Call for Human Rights mobilizes a network of 2,000 rabbis and cantors from all streams of Judaism to respect and advance the human rights of all people.

“Rabbi Tepperman is a true Rabbinic Human Rights Hero,” said Rabbi Jill Jacobs, T’ruah’s executive director. “Warm, inspiring and tireless, he is a role model for all clergy who take seriously our responsibility to make the world a better, more just place. His impact can be felt not just among the countless Bnai Keshet members who, under his leadership, have mobilized to defend the rights of immigrants and other vulnerable people, but in the broader community.”

Since arriving at Bnai Keshet in 2002, he has led his congregants and colleagues across faiths to advocate on a number of social justice issues, including marriage equality, reducing gun violence and defending the rights of migrants and refugees, particularly Muslims affected by the travel ban. He led the effort to make Bnai Keshet a sanctuary synagogue and championed its hosting of families seeking asylum from Honduras and the Democratic Republic of Congo. 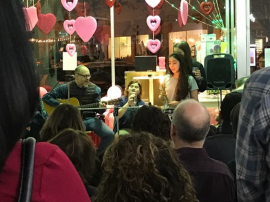 With a grant from Reconstructing Judaism, Rabbi Elliott Tepperman organized Havdalah Café events, bringing arts and culture to the forefront of communal experience.

He’s managed to do all this without sacrificing a focus on prayer and study.

“It wouldn’t make sense for us to be a synagogue if we weren’t also deeply committed to having a vibrant prayer life. We have Torah study every Shabbat. We have it throughout the week. We are studying Talmud. That has to be part of what we do,” said Tepperman, 50, in a recent interview.

Some might take it as a given, but why is it so important for Bnai Keshet to be involved, as a community, in social justice action?

“And if we really are a covenantal community, then when we come to realize that when there are members who are suffering, it’s incumbent on us to try and identify how we might be able to use our power in connection with others to address those issues. It is incumbent on us to visit the sick or comfort the mourner,” he added.

Tepperman was raised in Fresno, Calif. He describes his hometown, located in the central part of the state, as a world away from the liberal enclaves many might picture when they think of the Golden State. The city, which he described as suburban sprawl surrounded by farmland, had a surprisingly diverse population and an active havurah of which his parents were leaders. He recalled being engaged by his community’s participatory and intellectual nature, similar to what he would later understand as Reconstructionist Judaism. His Jewish identity was further cemented at the Reform Movement’s Camp Swig.

“It was very much like Camp Havaya in so many regards. It had a tremendous amount of spiritual life,” he recalled. “You know coming from a place like Fresno, to be in a community where everybody was Jewish was by itself mind-blowing, but they had a deep educational program there that really brought Judaism to life.” 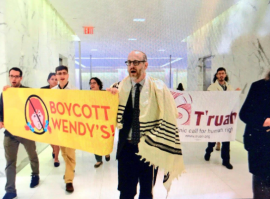 Tepperman attended the University of California, Santa Cruz, where he majored in American Studies and discovered activism and community organizing. He was first arrested trying to shut down the production of first-strike nuclear missiles at Lockheed Martin just up the road from the college.  (His most recent act of civil disobedience occurred just last year as he staged a sit-in inside the offices of an anti-DACA member of Congress and was arrested.)

After graduating, Tepperman worked as a union organizer in his home state as he searched for ways to combine his commitment to activism with his love for Judaism. These days, there is a plethora of Jewish organizations and rabbinic positions pursuing grassroots activism in a Jewish framework. In the mid-1990s the options were far more limited.

As he researched and applied to rabbinical schools, and learned more about Reconstructionist Judaism, Tepperman found a movement that best represented his approach to Judaism.

During his time at RRC, and through his field placement experience, Tepperman decided on taking the congregational career path. His goal became to live out “what it would mean for a community to sustain itself as a community for its own sake, while it tried to be a powerful force for making change in the world.”

While at RRC, Tepperman learned many practical lessons he’s applied to his organizing work. “One learning was from Rabbi David Teutsch, who said, ‘You can make almost any change that you might want to do in a synagogue, you just have to be willing to let that change happen over five years.’ So you have to be willing to embrace a long-term approach.”

Tepperman is the first to acknowledge that change didn’t happen overnight at Bnai Keshet, and he learned from many experiences he now deems failures. What helped him most to build a culture of Torah-infused activism was employing the skills and approach he acquired as a community organizer. That entails meeting congregants one-on-one and really getting to know what matters to them. 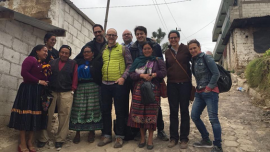 “It is about building deep relationships within the community that you serve. It is about understanding the challenges, the self-interest, and what keeps people up at night in your community,” he said. The fact that so many congregants felt a direct connection to the immigration experience was a major reason Bnai Keshet was able to lean into the work on behalf of undocumented immigrants and refugees.

When describing his rabbi, Craig Levine, a former Bnai Keshet co-president, likes to paraphrase a Jack Nicholson line from the film “As Good as it Gets”: “He makes me want to be a better man.”

“I know many dozens of people for whom that is true,” said Levine, one of the individuals who nominated Tepperman for the T’ruah award.  “He does that by leading, inspiring, by role-modeling, by calling us to follow the better angels of our nature. He is a moral leader, and I do not use that term lightly.”

In a suburban community in which a range of views are represented, Levine said Tepperman makes sure all voices are cherished and respected. Tepperman, Levine said, has taken the lead on issues that inherently touch on politics without being divisive or exclusionary.

“I work really hard to not have our conversations be partisan, which is different from not political,” Tepperman said. “As a community, we’re at our best when we are talking about issues that might be framed as social justice issues and we are not talking about them in the tired, cliché and predictable ways that you read about in the papers or get framed by the parties.”

Like many religious leaders, Tepperman balances his leadership within and outside the Bnai Keshet community with his role as a husband and father. He is married to Sarah O’Leary and is the proud father of Akiva-Lev and Sam, both of whom are growing up at Bnai Keshet.

“Both parenting and careers can take up all available oxygen, and I try and remember that there is value in having them balance each other,” he said. “I’m grateful that I’m able to do the work that I do and I think it sets a certain kind of example for my sons of a way to live in the world, a way that can integrate one’s passions and vision into your work life.”

Leading Bnai Keshet may take enormous effort, but in Roberta Elliott’s eyes, her rabbi often makes it look effortless. “I never fail to be astonished at what he is able to accomplish. He helps so many of us become our authentic selves,” she said. “He makes it look really easy and second nature, but it must be really difficult.”