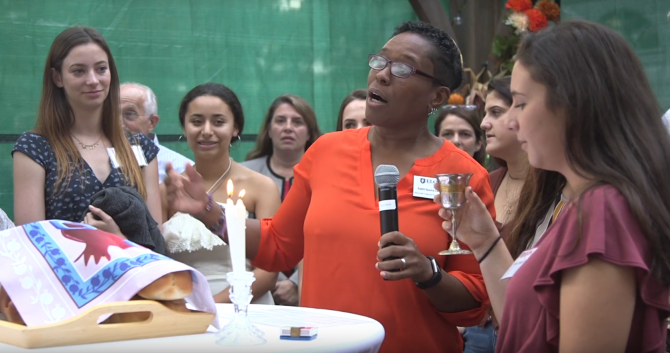 The video segment focuses on Lawson’s path to the rabbinate, her immediate impact at Elon, and the backlash and she still encounters in some segments of the Jewish community. Lawson is a Jew-by-choice and woman of color who identifies as a lesbian. During her years at student at the Reconstructionist Rabbinical College, Lawson was a pioneer in the use of myriad social media platforms to teach Torah. JTA gave Lawson the moniker “the Snapchat rabbi.”

“You have to figure out ways to get people to come to you or you can go to them,” Lawson tells her interviewer.

Asked whether she wants to be seen as “just another rabbi” or a symbol, Lawson, with her usual candor, replied “both.”

“First of all, the students I interact with, I don’t think they really care. I think they care that they have a rabbi and that I am engaged with them. And that’s really good because we are raising a generation of Jews to look past whatever their grandfather’s rabbi was. One of the things I want is I want the larger Jewish community to understand that the rabbis who are coming up today are a diverse group of people. Many of them are people of color. Many of them are not straight. Many of them might be married to non-Jews. My difference, my diversity, is helping people to become aware of that.”

If you want more on Rabbi Sandra, earlier this year, she was a guest on #TrendingJewish, a Reconstructing Judaism podcast.  This interview was meant to focus on the intersection of Judaism and technology. But no illuminating conversation completely goes as planned. Rabbi Sandra explains how it was impossible to discuss her adoption of social media and technology without delving into questions of race, identity and sexuality.

During her years at the college, Lawson was also the subject of several articles, including this piece by JTA’s Ben Sales, and this article by Kristen E. Holmes of the Philadelphia Inquirer.

The college is extremely proud to count Lawson of one of its more than 400 graduates serving the world, helping individuals and communities reconstruct Judaism for their time.