‘We Are All Dor Hadash’

[This article has been updated since its original posting on November 6, 2018]

Rabbi Erin Hirsh, ’00, grew up in the Squirrel Hill section of Pittsburgh. Hirsh and her family attended a Reform synagogue. While in high school, she heard something a little out of the ordinary from her friends: They loved their Jewish community and going to services.

The Hirsh family had also joined a community that was, and remains, thoroughly committed to the egalitarian ethos of Reconstructionism. Deliberately, the community has chosen to remain lay-led, even though a number of rabbis have belonged over the years and others, like Hirsh, were shaped by the community. The family, hesitant at first, later immersed themselves in Dor Hadash. (The community frequently hosts scholars-in-residence and has experimented with visiting rabbis.)

“The members were all really engaged. Everyone, it seemed, went to services and sat on a number of committees,” recalled Hirsh, who has held a number of positions with the Reconstructionist movement and affiliates throughout her career. “It’s an extraordinary community model.”

Hirsh visits Dor Hadash often and had traveled to Pittsburgh on the weekend of Oct. 26 to attend a Kabbalat Shabbat service led by Rabbi Yitzhak Husbands-Hankin, rabbi emeritus of Temple Beth Israel in Eugene, Ore. Hirsh and her mother ended up staying home. By all accounts, it was an evening of spirited song and prayer — a large turnout that offered a testament to the vibrancy of the community.

Tragically, an evening to remember quickly became a distant memory. 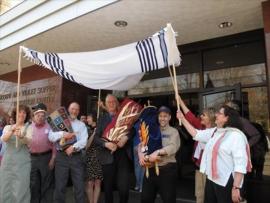 The world knows what happened the next morning before 10 a.m. Lone gunman and current suspect, Robert Bowers, fired indiscriminately at worshippers, killing 11 people and wounding six others. Dr. Jerry Rabinowitz, the 66-year-old former co-president of Dor Hadash, died in the attack. Dan Leger, a regular synagogue-goer Hirsh described as the “heart and soul” of the congregation, was seriously wounded and to date remains hospitalized. Hirsh described the two as among the community’s most active members and leaders.

“The service was warm and beautiful, with so much singing and talk about caring for each other and our world,” wrote Ellen Leger, wife of Dan Leger, in an email meant to be shared. “The next morning Dan went off to shul and I decided to take a lovely autumn walk in Frick Park with our dogs. When I got home around 10, there was a knock at the door. Friends had come over to see if I knew what was going on.”

According to movement leaders, the community, needless to say, is reeling. Rabbi Deborah Waxman, Ph.D., president of Reconstructing Judaism, visited with members of Dor Hadash the day after the shooting and remains in touch with them. “I said to them that, on behalf of 50,000 Reconstructionists, I want you to know we are here for you, we will support you, and we will do whatever we can,” said Waxman. “We understand that this is a long haul, and we will be in it with you. I told them that the president of Ner Shalom in Cotati, Calif., had posted on the president’s listserv that, ‘We are all Dor Hadash today.’ That is the sentiment of every single Reconstructionist community.”

Waxman explained that community members are committed to remaining as vibrant and strong as ever. The Tree of Life building is not expected to be habitable for one to two years. Dor Hadash has received numerous offers to house its services and events. In the coming weeks and months, the community welcomes visitors to its Shabbat services (first and third Friday and second Saturday of each month), but would like to be notified in advance (ritual@dorhadash.net.)

Please consider making a donation to help us collectively rebuild Dor Hadash’s prayer resources. A gift of $36 will cover the cost and shipping of one copy of Shabbat and the Festivals. A gift of $18 will cover one copy of Prayers for a House of Mourning. If sufficient gifts come in, we will help them replace their chumashim. 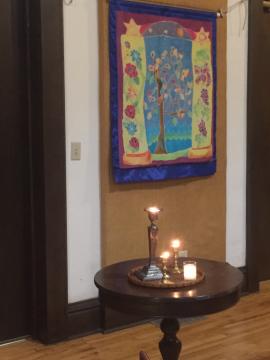 Leger, a nurse and a University of Pittsburgh Medical Center chaplain, was critically wounded in the attack — now recovering, he has recently been moved from the ICU to a private room.

“I won’t be lighting my Shabbes candles this week, or next or perhaps longer,” Ellen Leger wrote. “I will wait until my dearest love Dan is home again. I thank G*d that I know he will eventually come home. My heart breaks for my friend Miri and her family and all the other families whose dear ones were murdered last week.”

Hirsh recalled that when her father became ill last year, it was Leger who supported her parents through the dying process and later officiated at the funeral.

In a series of tributes in the news, Rabinowitz was hailed as a hero in life and in death. He reportedly ran towards the shooter. In obituaries, he was described as the kind of doctor who made house calls, who for a while called a patient daily in India to check on his health and was always there for those in need. He was also reported to be one of the first doctors in the Pittsburgh area who was willing to treat patients with AIDS.

Writing in the Forward, community activist Michael Kerr noted that “Dr. Rabinowitz was always there during the most terrifying and frightening time of my life. I will remember him always.” Miri Rabinowitz, Jerry’s widow, who’d served with him as Dor Hadash’s co-president, has asked that as people do mitzvot or acts of gemilut hasadim (lovingkindness), they do them in his name to honor his legacy.

More than 1,500 people attended his funeral at the Jewish Community Center. Among them was Rabbi Elyse Wechterman, executive director of the Reconstructionist Rabbinical Association.

“From Orthodox to secular to non-Jewish, the whole neighborhood was engaged. It was profoundly moving to see such a display of unity at this time,” said Wechterman, who attended on behalf of the nearly 400 rabbis who belong to the RRA, as well as represented the movement. “Members of Dor Hadash spoke again and again about feeling held and supported by the movement.”

As was widely reported in the press, there is speculation that the gunman specifically targeted Dor Hadash, one of three congregations that meets on the campus owned by Tree of Life*Or L’Simcha, a Conservative synagogue. A year-and-a-half ago, Dor Hadash collectively decided to make aiding refugees a congregational priority and had recently participated in National Refugee Shabbat.

Carolyn Ban, who chairs Dor Hadash’s social-justice committee, told the Los Angeles Times that Dor Hadash “stands for diversity, inclusion … for LGBT rights, we have leaders from the LGBT community, we have mixed marriages, we have people of color in the congregation … you get the picture. This is a very socially engaged congregation.”

In a statement released last week, Reconstructing Judaism reaffirmed its commitment to refugees and immigrants.

“As a movement, we stand firmly with HIAS, and we believe in the Jewish values that undergird their work on behalf of refugees today, the vast majority of whom are not Jewish. As HIAS’s CEO, Mark Hetfield, often puts it, ‘At HIAS we used to help refugees because they were Jews. Now, we help refugees because we are Jews.’ Amen.”