Work on the Right Side

“Nothing has to happen; anything can happen,” Rabbi Sid Schwarz writes on the blackboard when teaching clergy how to create compelling spiritual communities at CLAL, The National Jewish Center for Learning and Leadership. Obviously, nobody sitting in Sid’s seminars at the Clergy Leadership Incubator is hoping for a career defined by the left side of this couplet. But what does it take to work on the right side? 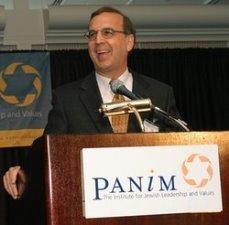 The answer is embedded in Sid’s own story. He is the founder of Adat Shalom Reconstructionist Congregation in Bethesda, Maryland and many other programs that have impacted our world, including: PANIM, The Institute for Jewish Leadership and Values, which ran programs for high school, college and post-college students; the Clergy Leadership Incubator (CLI) at Clal; The Rene Cassin Fellowship Program, a human rights fellowship with hubs in New York, London and Jerusalem; the Haiti Project; and the Interfaith Mission for Peace and Understanding, which does work in the Middle East with nationally prominent faith leaders. This prolific man has also written multiple books, such as Finding a Spiritual Home, Judaism and Justice, and Jewish Megatrends.

Clearly, Sid Schwarz works on the side where anything can happen.

“Someone once told me I think architecturally,” Sid offered as an explanation for his track record of getting things done. “That means three things. One, I see a need and can imagine programmatic responses to that need. Two, I love building new organizations. I can lay out the pieces that are necessary to make a new endeavor successful. And three, I build a team with both pros and volunteers. That’s the critical part.”

I think there’s a lot more to my friend Sid’s success than a clear project management plan, so I probe some more.

He reveals, “I am a ‘can do’ person. I’m willing to do what it takes to get the job done. I have little patience for people who make excuses. I launched PANIM and Adat Shalom in the same year. I grew them both for eight years. It was pretty intense. I only had the vaguest idea of all the details you need to build an organization from the ground up.”

Sid is emphatic that, “There is no glamor in launching a start-up. You have to be willing to do the dirty work.”

He tells the story of some staff at PANIM who complained about work that they thought was “beneath them.” He had little sympathy.

“I had a rabbinical degree, a Ph.D. and a pretty nifty resume when I started PANIM. I did all the detail work myself because I didn’t have the money to hire staff yet. If it meant licking the stamps, that’s what I did.”

Sid advises anyone who is considering launching a start up to “be willing to work twice as hard as anyone on your team.”

“People want to start something new because they love an aspect of Jewish life like spirituality or social justice. But they’re going to have to raise money, get a 501(c)(3) certificate from the IRS, build a Board, and do recruiting. It takes diligence and a willingness to do the dirty work. Not everyone is cut out for it.” 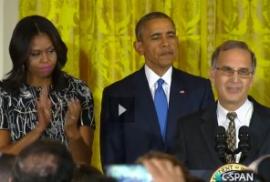 Recently, I found Sid working on the left side. Politically that is. President Obama honored Sid by inviting him to teach at the White House’s Hanukkah celebration. Supreme Court Justices, senators and international dignitaries listened to Sid’s teaching. Sid and Barack shared basketball stories. Just after speaking, the President leaned over and whispered a private message into Sid’s ear.

Making anything happen sounds pretty glamorous tome. Next time I see Sid, I’ll ask him what the President said.