The Founding of the Reconstructionist Rabbinical College

This piece was originally commissioned by the Reconstructionist Rabbinical Association, which published a version of it in the Summer 2018 edition of  Connection, the association’s newsletter. Part II of this history will appear later this academic year in Reconstructing Judaism Today.

For more on RRC’s 50th anniversary, visit our 50th Anniversary Showcase at https://www.rrc.edu/50th. 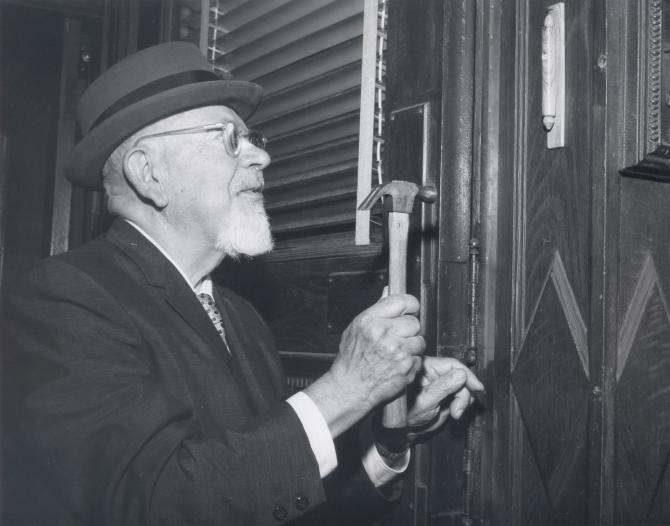 Mordecai M. Kaplan affixing a mezuzah to the doorpost of the RRC campus at Broad Street during the dedication ceremony of the college, October 13, 1968.

The establishment of a dedicated Reconstructionist institution fulfilled Kaplan’s educational aspirations. He identified powerfully as an educator: Jewish education was the focus of the penultimate chapter of Judaism as a Civilization. In his 1936 book Judaism in Transition, he suggested a rabbinical training curriculum that would provide leadership training for a civilizational approach to Jewish life. Kaplan subsequently built on this leadership vision to propose a university of Judaism to  help American Jews build a rich and inclusive Jewish civilization based on  peoplehood, including it as the summative chapter of his 1948 Future of the American Jew. (Kaplan’s ultimate goal was for the Jewish Theological Seminary to be reorganized along these lines, but Conservative movement leaders adopted the name and the enthusiasm it garnered to establish a West Coast institution.) 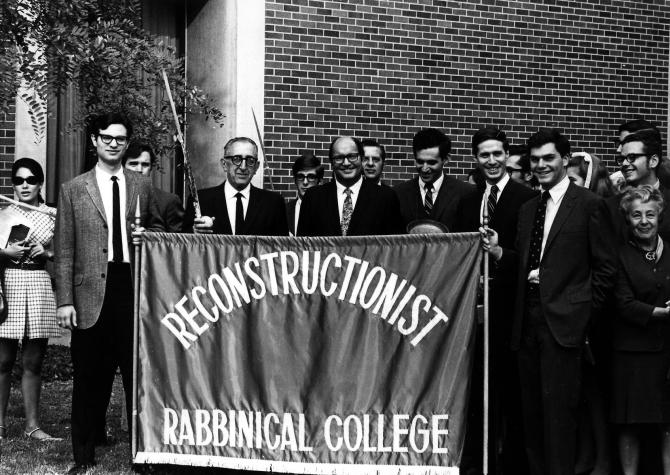 Yet establishing any institution had to overcome Kaplan’s three decades of resistance to establishing a separate denomination. In part, he and his followers recognized the decline of Kaplan’s influence at the Jewish Theological Seminary of America and beyond. Though still widely respected, the 82-year old thinker was no longer the towering Jewish communal giant he was in the period preceding and immediately following the Second World War. Kaplan was also intensively frustrated by Zionism’s singular focus on the Jewish state following 1948. Throughout the 1950s, Kaplan expended significant energies trying to convince the World Zionist Organization to promote worldwide Jewish peoplehood. His lack of success led Kaplan to think differently about the roles of American Jewish institutions in fostering Jewish life. By 1959, Kaplan began to imagine a separate institution. He wrote to Abram Sachar, Brandeis University president proposing a “Research Institute for the Spiritual Unity and Functioning of the Jewish People,” and developing a plan for a Reconstructionist graduate school.

In the same period, the Reconstructionist movement was in the midst of significant changes. Many years of trying to convince the Conservative movement to adopt “unity in diversity”—a Kaplanian reworking of the United States motto—and recognize Reconstructionism as the left-wing of the Conservative movement was yielding only modest success. In 1959, the Jewish Reconstructionist Foundation was reorganized and Ira Eisenstein became president, with an agenda to promote Reconstructionism through institutions. This restructuring followed the 1955 establishment of a congregational union by four congregations. Joined by other congregations as well as newly forming havurot, congregational members met in 1959 to collaborate and agitate for resources and appropriately trained leaders. At the 1963 convening of the Federation of Reconstructionist Congregations and Havurot, there was “a long heart-to-heart talk about the movement and its future.” Kaplan was so inspired by this convening — or so pressured by his disciples — that he penned his letter of resignation from JTS, enabling plans for an educational institution to advance. 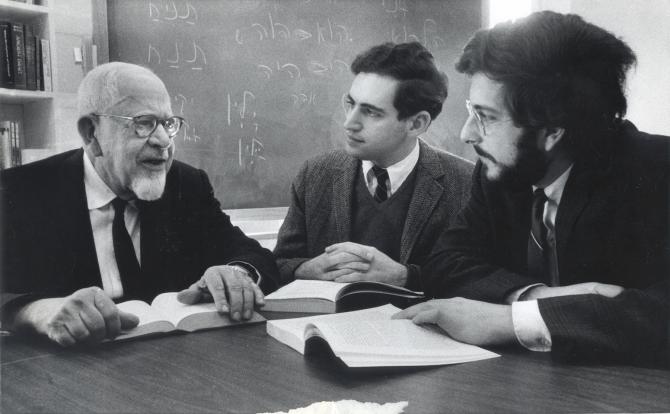 A heart attack in 1964 temporarily limited Eisenstein’s capacities. Late in 1966, the Foundation board committed to serious exploration of establishing a leadership training program. A planning committee was convened, and Eisenstein made a modest announcement in the spring Reconstructionist newsletter. The 1967 FRCH Convention powered forward the idea of a training institution. The Federation passed the following resolution on June 1, 1967:

Worried about the financial burden of an independent educational institution, the planning committee investigated burgeoning Jewish studies programs at secular universities and considered establishing a cooperative program. Arthur Gilbert, a Reform-trained rabbi with long ties to the Reconstructionist movement, was hired to take primary responsibility for moving the initiative forward. Gilbert focused on partnering with established Jewish studies programs, while Eisenstein worked on building up support, financial and otherwise, and responding to criticism that with this move Reconstructionism was betraying its commitment to avoid divisiveness and promote collaboration. 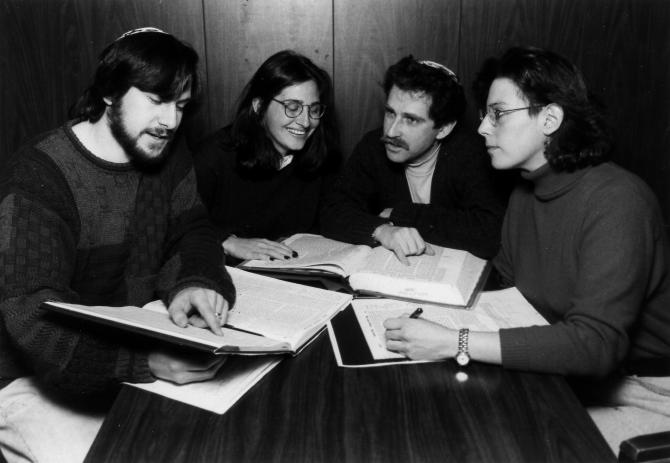 By late fall 1967, Gilbert had approached several universities, finding Temple University to be the most enthusiastic. In 1965, Temple had shuttered its seminary, become a state-related university, and was expanding its religion department. The Foundation board authorized Gilbert to begin negotiations and by January 1968, Gilbert recommended proceeding. Prospective rabbinical students would apply for admission as graduate students at Temple, and if admitted would be accepted by the Reconstructionists. Rabbinical students would be expected to complete a Ph.D. in Jewish studies at Temple and pursue additional coursework to make them eligible for the title of rabbi. Eisenstein reviewed plans for obtaining a temporary charter from the Commonwealth, assembling an advisory council to form the faculty, renting appropriate space and raising adequate funds. While the Commonwealth required assets of at least $500,000 for a permanent charter, $50,000/year for three years would enable the launch. Pledges of $116,000 were made at the meeting and a national fundraising drive was announced. The board voted to move forward.

The news and details were announced to the wider Reconstructionist world in a February 1968 editorial in The Reconstructionist. The editors rejoiced, “This will be the first time that the Reconstructionist philosophy will be taught not as a separate subject but as the pervading approach to all subjects.” A somewhat rundown building located near both Temple University and Dropsie College was purchased for $25,000, and a supporter provided funds to purchase basic furniture. Kaplan and Rabbi Max Schenk donated their libraries to establish the school’s library. Eisenstein and Gilbert began generating a curriculum reflecting the evolving religious civilization based on Kaplan’s chapter on rabbinic training from Judaism in Transition. Kaplan vigorously refused Eisenstein’s entreaties that the school be named after him, though he assented to the library being named in his honor. While spring announcements referred to “the Reconstructionist Rabbinical School,” by fall “Reconstructionist Rabbinical College” was formalized. 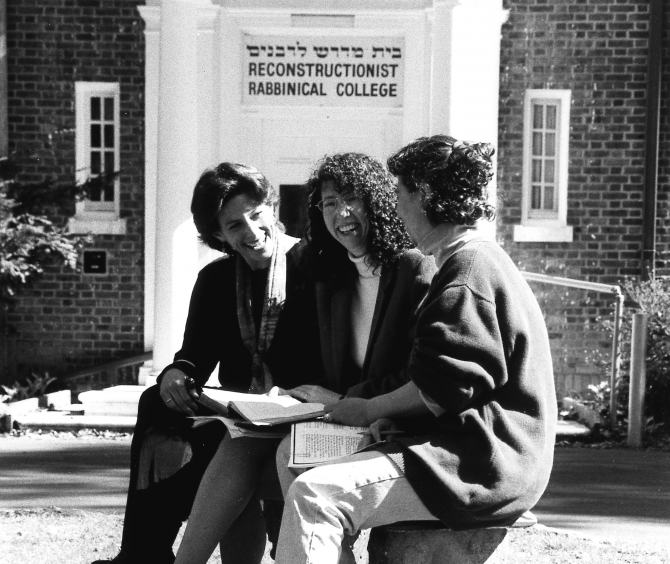 To recruit students, the Foundation circulated a large poster to all Hillel Foundations; reached out to T’hiyah, the Reconstructionist college program; and recruited among the children of long-time supporters and readers of The Reconstructionist. These strategies — and the draft for the Vietnam War — created a robust initial class of 13 students. Eisenstein reflected in the 1980s that many of the early applicants were quite radical, questioning all inherited values and concepts. Most eventually dropped out, with only two ultimately completing the program. One potential applicant was a woman. Eisenstein wrote to her: “I gather from your name that you are a woman and therefore I hesitate to send you an application form or other materials dealing with our school. While we have every intention ultimately to consider favorably the admission of women into our rabbinical training course, we are not prepared to do so at this time.” The reluctance was resolved within the first year as Sandy Eisensberg entered with the second class. When she graduated, Sandy was the second American woman to become a rabbi and, with her marriage to classmate Dennis Sasso, they became the first rabbinic couple in history. 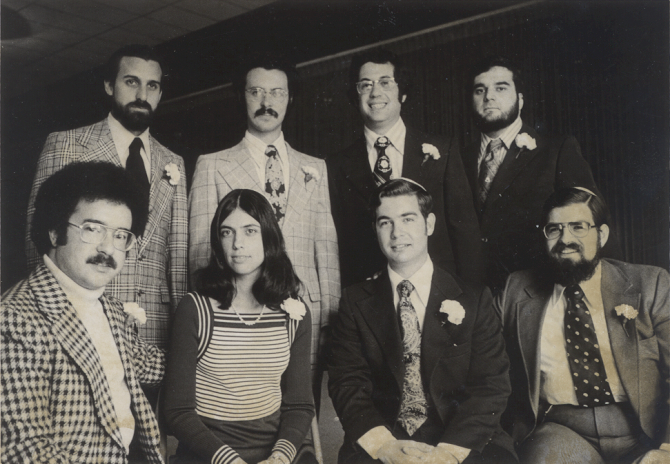 The College was dedicated on Sunday, October 13, 1968, on Hoshanah Rabbah. The formal ceremony took place on Temple’s campus. Speakers included Eisenstein, the founding president; Dr. Bernard Phillips, chair of Temple’s Religion Department; the president of Lancaster Theological Seminary on behalf of the American Association of Theological Schools; and Abraham Goodman on behalf of the Jewish Reconstructionist Foundation board. Arthur Gilbert was acknowledged for his monumental efforts to establish the College and celebrated as the founding dean. He read telegrams from Jewish and Christian seminaries and introduced each of the new rabbinical students and faculty members. Kaplan gave the major address. The guests then walked with lulavim and a banner to the new RRC building. They chanted verses from Hallel, Kaplan affixed the mezuzah and everyone in attendance recited the blessing and shehekyiyanu. Classes began the following day.

The founding of RRC provided a cadre of leaders for the Reconstructionist movement and beyond, with more than 350 rabbis serving congregations, on campus, as educators, organizational leaders, chaplains and entrepreneurs. The College has served as the incubator for such influential programs as the Shalom Center, Shomrei Adamah, Moving Traditions and Ritualwell.org, and as the creative source for the Kol Haneshamah prayer book series and the Guide to Jewish Practice. Even as many of the challenges present at the founding persist, the 2012 merger between the College and the congregational union presents opportunities for further influence and expansion of a Reconstructionist approach. 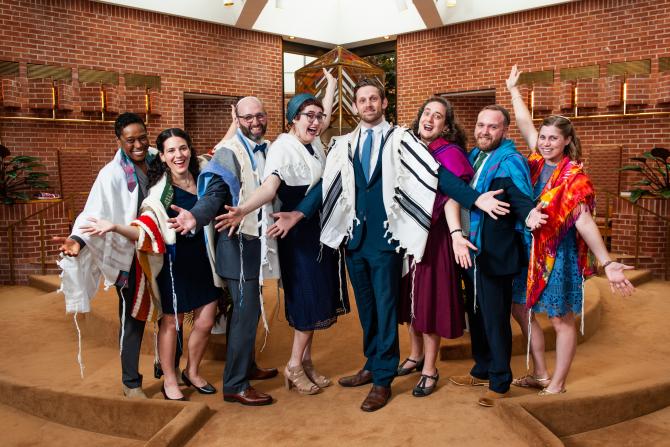 Part II of this history will appear later this academic year in Reconstructing Judaism Today. Part II will concern the implications of the founding of the College and the continuities and discontinuities of the current moment.

For more on RRC’s 50th anniversary, visit our 50th Anniversary Showcase at https://www.rrc.edu/50th