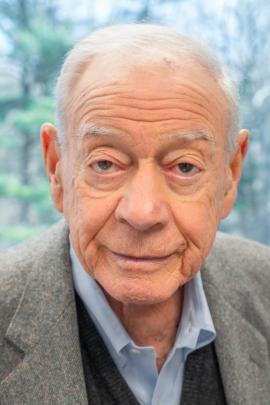 Howard N. Blitman, a long-serving member of Reconstructing Judaism’s Board of Governors, was presented with the organization’s Presidential Recognition Award. The small, socially-distanced ceremony was held on Sept. 13 at Bet Am Shalom, a Reconstructionist congregation in White Plains, N.Y., where he has been a longtime member. Many more people tuned into the proceedings via video conference.

(A copy of the event’s program is available here.)

(A copy of the event’s program is available here.)

The honor is presented to an individual who has devoted his or her life to advancing Reconstructionist Judaism in both institution and practice — a person who has sown the seeds that nurture rabbinical training and movement leadership. This award honors an individual whose life’s work has been to advance Reconstructionist Judaism profoundly, making an inclusive, vibrant, open and thoughtful Jewish practice available to countless individuals, and thereby transforming the landscape of Judaism in our day.

“Your focus, Howard, if it’s not on your family, your focus is on the future. You are a true Reconstructionist, always looking forward, curious and confident,” Waxman told Blitman as she presented the award. “Howard, you have always built for the long haul, combining vision and creativity with good and careful planning. You have done that for your family, for the Bet Am Shalom community and for the Reconstructionist movement.”

(Her complete remarks are available at this link.)

(Her complete remarks are available at this link.)

Solomon Hoffman, a musician and a student at the Reconstructionist Rabbinical College (RRC), performed an original composition featuring the words of Psalm 118.

Even Ma’asu(Psalm 118:22) by Solomon Hoffman by Reconstructing Judaism

Blitman, a philanthropist and Reconstructionist movement leader, is a consulting engineer and the president of The Blitman Building Corporation (construction managers, builders and developers).

He was raised in Brooklyn, N.Y. His parents, Charles and Anna, were close friends with Rabbi Mordecai Kaplan, the founder of Reconstructionist Judaism, and Rabbi Ira Eisenstein, Kaplan’s son-in-law, who later became the first president of RRC. As a teenager, Blitman studied with Kaplan, Eisenstein and with Judith Kaplan-Eisenstein (Kaplan’s daughter and Eisenstein’s wife), and credits each with shaping his understanding of Judaism.

Blitman earned a Bachelor of Civil Engineering degree from Rensselaer Polytechnic Institute (RPI) in 1950 in Troy, N.Y., and a Master of Arts in political science and government from the Graduate Faculty of the New School of Social Research in New York City in 1976.

An officer in the Chemical Corp of the United States Army during World War II, he also studied at the Virginia Military Institute. During the Korean War, he was recalled to active duty and took charge of the construction of a chemical plant. He received Special Commendation from the Chief of the Chemical Corps.

After Korea, Blitman resumed his engineering career, joining The Blitman Construction Corporation. In 1970, he was elected president of the corporation, serving 11 years in that role. In 1981, he formed The Blitman Building Corporation.

Some of his most well-known projects included the Customs House of the World Trade Center and the Transportation Center of Journal Square in New Jersey. He also constructed numerous high-rise luxury apartment buildings, suburban housing developments and high-quality industrial projects on the East Coast.

Blitman worked on panels and cases of the American Arbitration Association. He has lectured at the New School and the Practicing Law Institute, and written articles in trade and professional journals.

For more than 65 years, he has been a trustee, supporter and volunteer on behalf of RPI.

He was a trustee of Continuum Health Partners Inc./Beth Israel Medical Center in New York City and has served as one of the vice chairmen of the Board of Trustees. He is currently a trustee on the Board of Overseers of Beth Israel and also serves on the board of the Phillips Beth Israel School of Nursing. He is also a board member of the New School for Social Research.

For more than 50 years, Blitman has volunteered for the Jewish Child Care Agency of New York, once serving as chairman of its board of directors. For more than 25 years, he has been active with the UJA-Federation of New York, serving on many subcommittees. He currently sits on the Capital Project Review Committee and the Jewish Communal Network Commission.

He is married to Maureen and has three children, Barbara, Lee and Robin, and eight grandchildren.