Home » The Center for Jewish Ethics » Jews, Race, and Religion » Lecture 1: Is the Talmud Racist?

Lecture 1: Is the Talmud Racist?

In this presentation on January 28, 2021, Herbert D. Katz Center for Advanced Judaic Studies director Professor Steve Weitzman introduced the series and its goals. Following that, Mira Wasserman explored concepts of race and racism as they relate to the foundational source of Jewish tradition, the Babylonian Talmud. 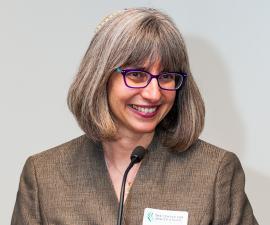 Rabbi Mira Wasserman, Ph.D., is director of the Center for Jewish Ethics and assistant professor of rabbinic literature at the Reconstructionist Rabbinical College. Her book Jews, Gentiles, and Other Animals is a study of how the Talmud describes what makes Jews different from others.

Time did not allow for me to address all the interesting questions and insights that participants shared during the lecture, so these brief notes are an opportunity to extend the conversation.

A number of comments clustered around two questions:

1. Mishnah Sanhedrin 4:5 is transmitted in two divergent ways; how do you account for the discrepancy and is it fair to characterize this as a universalist text?

In my presentation, I identified Mishnah Sanhedrin 4:5 as a passage that can serve as a resource in opposing racism. I cited a key section of the passage like this:

As many noted—and as I indicated on the sourcesheet here—this tradition appears differently in the printed version of the Mishnah, and in its citation in the Babylonian Talmud which reads instead:

While I characterized this passage as strongly universalist in its message, Version 2 introduces a strongly particularist message. It seems to suggest that Jewish lives are more worthy than the lives of others.

Version 2 does not make much sense, in that the invocation of the first human being cannot serve as a justification for valuing some humans over others.

This raises the question: If Version 2 is not the most original and doesn’t even make good sense, why does this become the dominant version in printings of both the Mishnah and the Babylonian Talmud? I see this development as a symptom of the inward focus of the commentarial tradition.

Critical scholarship and ethical considerations converge in my proposal to restore the language of the original Mishnah, with its affirmation of the infinite value of all human lives.

2. Do you think the idea that Israel is the chosen people is racist?

I do not think the doctrine of chosenness is necessarily racist, though it can certainly be deployed in racist ways.

For most scholars, there are two key components to racism: 1. A judgement about a group that is prejudiced and essentializing, and 2. A hierarchy that denigrates and penalizes that group.

There are examples, however, of appeals to Jewish chosenness that are racist, for example, the claim that Jews are inherently more moral than others, or that Jews have a divine right to dominate other peoples.

Even when interpretations of chosenness are not racist, there is still good reason to think carefully and critically about the ethical implications of invoking this language. As Mordecai Kaplan observed, the doctrine of chosenness served Jews in the past by enhancing the pride and self-respect of a marginalized and disempowered people. Today, however, an emphasis on chosenness and what it implies about Jewish superiority runs the risk of encouraging divisiveness, hierarchy, and racialized thinking.