Home » The Center for Jewish Ethics » Jews, Race, and Religion » Lecture 3: Jews and the Religion of Whiteness

Lecture 3: Jews and the Religion of Whiteness

What is the relationship between Jewishness and Whiteness? What is the nature of their entanglement? Such are the driving questions of this talk, which elaborates Whiteness as a geopolitical practice of religion, indeed as a practice of myth, that institutes the global idea of race or that organizes the planet through racial capitalism. The nature of this Whiteness is the subject of this talk with specific reference to the figural meaning of the Jews within the Whiteness of the West. 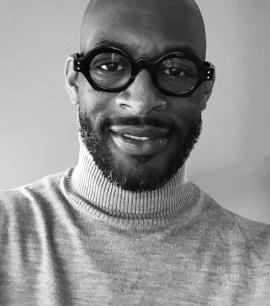 J. Kameron Carter is Professor of Religious Studies at Indiana University, Bloomington, where he has additional appointments in the English and African American & African Diaspora Studies departments. In his work, he focuses on questions of blackness, empire and ecology as matters of political theology and the sacred. Dr. Carter is author of Race: A Theological Account (Oxford UP, 2008). Additionally, he is the editor of and has contributing essays in Religion and the Futures of Blackness (a special issue of South Atlantic Quarterly, 2013) and The Matter of Black Religion: Thinking with Charles H. Long (a special issue of the Journal of American Religion, 2020). His book, The Religion of Whiteness: An Apocalyptic Lyric is forthcoming with Yale UP (fall 2020) and he is in the final stages of another book project, “Black Rapture: A Poetics of the Sacred.” The Religion of Whiteness and Black Rapture are the first two volumes of a trilogy whose general title is Mystic Song.